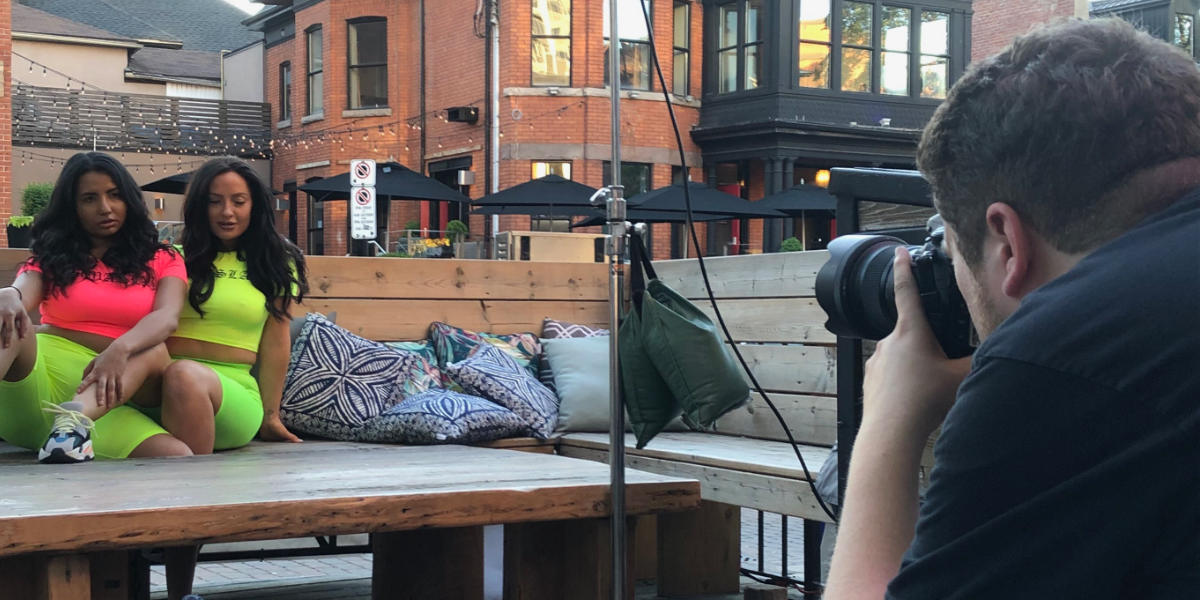 James Heaslip is a man of many talents. While his primary artistic focus currently revolves around photography, he is also an established director, cinematographer and all-around incredible guy.

Heaslip thrives on tension. Whether in film, photography, television, or video games, it’s the feeling of not knowing what’s coming next which gets his blood pumping. It’s also what serves to drive his creative process.

“J.J. Abrams did a TED Talk about the ‘mystery box,’ and I find that theory so perfect. Just always wanting more…always having intrigue. If I can point to a photographer who’s a master of that, it’s Gregory Crewdson. That dude is a master of tension.”

More specifically, James’ most recent work hones in on sexual tension. The work which he’s produced while working out of Bong Mansion – Puff Digital/Higher Mentality’s very own creative incubator – has a strong sexual edge to it.

“Currently we’re working out of Bong Mansion. We are so fucking lucky to have a location like this to do good work out of, and we’re flooring it on some sexy stuff right now,” explains James. “I’ve always wanted to try boudoir photography, but I’ve always just kind of felt like a creep doing it. Like I’m a Sears catalog photographer or something like that. But women are very beautiful to me…so I’m doing sexy stuff right now.”

Heaslip has worked with a number of models while shooting at Bong Mansion and his work peppers the @bongmansion Instagram feed. One of his most recent subjects, Brittany DeVos, managed to truly encapsulate the tension and intrigue which James strives to capture.

“She showed up at [Bong Mansion] and she fucking owned it,” shouts James excitedly. “That’s what I’m talking about when I say that a subject shows up and just shows you something that leaves you saying: ‘I wasn’t expecting that…Pardon me?!

Another common thread in much of the photography which has been proliferating the portfolio of photographer James Heaslip as of late has been the inclusion or involvement of cannabis consumption. The utilization of weed in the photos also serves to play off of his own semi-recent love-affair with the smoking of the ganja. James describes cannabis’ role in his creative process as something which aided him in finding his way back to a productive path which he had strayed from.

“How does weed help? I used weed as a crutch for a while and then it just integrated its way into my life in a way that I really love,” Heaslip recalls. “I went through a really hard time. It was an extended period of creativity that was kind of like I sat down at a piano and I just fucking didn’t know how to play.

“It was like that for about eight years. I would work on other things, and I would make things, but it was like I was playing piano and looking behind me, thinking ‘Oh, no one’s noticing that I’m just smashing the keys like a fucking lunatic.’ Now I’ve sat back down with the piano and it feels like I can do a residency at a nightclub if I needed to.”

When it comes to favourite strains to guide him on his chosen path, James isn’t a particular type of fella. He’s smoked many different Sativas and Indicas, but at the end of the day, he’s happy just to smoke.

“This is very much a high school kid answer but, honestly, to me, weed is weed. I understand the difference between Indica and Sativa, but I’m more of a ‘let’s just throw it in that Wu-Tang grinder and fucking grab a bong and get at it’ type of smoker,” laughs James.

James just likes to ride the high and enjoy where the sensation takes him.

Not everyone in his immediate circle embraces Heaslip’s love of smoking herb. There have been instances with colleagues, family and even some friends where their negative opinion of smoking cannabis has skewed the ways in which they look at him.

“Unfortunately, there’s still a very negative stigma. I wish it wasn’t like that, and it just doesn’t make any sense to me,” laments James.

“I remember when I was on contract at work. I was sitting around eating lunch with some women I worked with, and they were talking about wine. They were going to a vineyard, excited to be doing a lot of wine tasting. I just said, ‘Hey, has anyone ordered their legal weed yet?’ And they all just looked at me like I was a fucking criminal.

“And my parents…” adds James, continuing, “I look up to my parents like crazy. I don’t expect to like every bit of my parents. That’s unreasonable, of course…and I don’t expect them to like every bit of me. As an adult, having to hide something…that is just not ideal. At the same time, it’s very generational. I know [the stigma] won’t be there once the boomers move on. Hopefully my parents will live for another hundred years, but we’ll see. I very much feel like it’s generational.”

Speaking with James, it’s obvious that he simply wants not to be judged negatively for smoking cannabis. He enjoys it, and just wants to continue to do what he does best. Moving forward, his goals are honest and pragmatic.

Heaslip is very humble – but not coy – regarding his talent. For now, he is happy to continue taking things as they come and simply go with the flow.

“I’m just really proud of the work I’m doing right now,” James admits. “I know that not all people who have followed my work through the years are super pumped on some of the stuff, but…in the least shitty way…I just don’t really care. I just want to make the shit that I want to make. I respect the viewers of my work, but I’m over making things to satisfy other people. I’m making things right now to satisfy my creative urges, and hungers, and the things that I need to scratch, and I need to peel. I’ve got little ticks that I just have to kind of explore, and I’m really having fun doing that. I just love photography, really.”

“I definitely will find my love for film again. I just have to step away from it for a while. It always cycles for me between photography and film. The scary times are when I’m not interested in either one…when I’m interested in just…nothing. But, if I’m interested in one or the other, and I’m digging out and just, like, flooring it, and learning as much as I can, and exposing myself to different artists, and different styles…those are the good times. Those are the salad days…with ranch, and the baby tomatoes that are in season when they pop in your mouth, man. I don’t know…that’s like heaven.”

James is one of the most sincere, wonderful people to know. He possesses a relentlessly creative spirit which manifests physically through the production of provocative and immersive work. Be sure to follow his artistic journey via Instagram @heaslipphoto, and check out some of his amazing work @bongmansion.