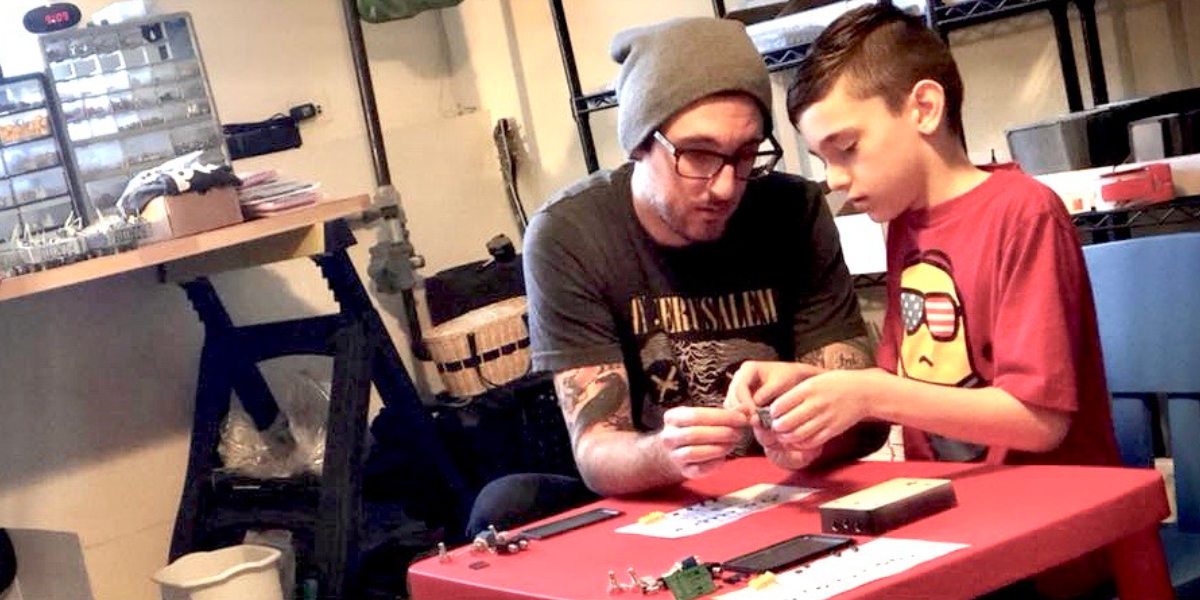 Fuzzrocious, creators of mind bending boutique bass/guitar effects pedals, is the brainchild of Ryan and Shannon Ratajski…with a little help from their two kids, Kaeden and Raeven. Ryan heads up the building and development, while Shannon creates incredible hand-painted artwork for a number of the pedal enclosures. It’s a partnership and process which has established Fuzzrocious Pedals as a stand-out brand in marketplace saturated with clones.

“We knew that we were doing something very different with offering up what was first sort of like a build service, but the big catch was that Shannon was painting all of these by hand. [Hand painting] really only happened at another company called ZVEX, and they never really did ‘custom’ work. Because we were so small, we had the benefit of time to really let Shannon shine in bringing her art forward. We knew that there was there was something missing in the industry. We liked what we were making, the joy that it brought people, and then getting to hang out with bands and cultivate those relationships. They went from new relationships, to working relationships, real life relationships…friendships.”

The very tangible personal touch, which people responded so favourably to, is what helped spread the gospel of Fuzzrocious to the masses. As word spread, and the company grew, and the opportunity to work directly with bands to create unique and specific builds presented itself more and more.

“The first band-inspired thing that we did came from when I was talking with Brian Cook (currently of Russian Circles and Sumac),” recounts Ratajski. “He used to play in a band called ‘Botch’ back in the day. Somehow it came up that the Botch song ‘Man The Ramparts’ was referred to as ‘Ram The Manparts’ when they would practice.

“I asked Brian if I could use that as the next pedal name, and they gave me permission to use the album artwork, kind of screw with it, and change the wording around. It was just fun! I love how organically that came out.”

While this first collaborative build was based more around inspiration drawn from a song title, the next step was to work with the Chicago-based doom metal band, Bongripper.

“Bongripper were using a pedal of ours called The Demon, and also the Cat Tail. We had the idea to put those in one box and get it specifically to the band’s settings.  So many people love that band. They’re all about that [guitar] tone and they wanted to know how to get it. So, we gave that to their crowd and it was very successful in terms of the scale of what a doom band can do, and what a company the size of Fuzzrocious can do. It was very good…and humbling.”

Fuzzrocious has also worked with the band Daughters (Ipecac Recordings) to create the “Empty Glass” collaboration, and Louisville, Kentucky’s Young Widows on the “Afterlife” reverb pedal. The company even had the distinct privilege of working with MXR and Jim Dunlop on the hugely anticipated Bass Distortion pedal.

One of Fuzzrocious’ most popular pedals has been the weed-culture-inspired 420 Fuzz which was released in a partnership with Reverb.com. The 420 Fuzz is a stoner-rock lover’s dream, and – thanks to the help of Dan Pizza at JuxtaPrints – even featured simulated keif sprinkles in the enclosure’s powder coat. A total of 420 pedals were produced in small batches, with each run getting its own colour scheme and unique mods. The release is one that Ryan Ratajski is most proud of, noting that each batch of the pedal would sell out within hours of hitting the market.

When asked about his personal relationship with cannabis, Ryan laughs when talking about how much the process of buying and consuming weed has changed over the years.

“Back in the day, getting weed would mean that you get whatever you’re getting from the person who’s getting it. You didn’t get to ask for, or know whether it was an indica or a sativa or whatever. You would just get it, and smoke it, and live with it.

“Now, I love Platinum Bubba Kush, because it makes my body go away, and then it makes my brain stop with the crazy thoughts. I can just sit and relax with my wife on the couch and watch TV. Then I can go to sleep, and maybe have a pleasant dream…or not dream at all…and then wake up the next day feeling great.”

Ryan is also quick to point out what he doesn’t like, adding, “I don’t typically like really cerebral, head spin, sativas. I’m the person that can’t do the teacups at an amusement park. I’ll be sick for like a week.“

When working, it usually comes down to indicas or hybrids.

“Platinum Bubba Kush is my number one, but Super Lemon Haze is also cool too. I like that for getting work done, and feeling relaxed while I’m still feeling super creative. A lot of what I do is very repetitive motion type stuff. Take this part, put it here. Solder, solder, solder, solder, solder. Cut, cut, cut, cut, cut. So, something that verges on a hybrid works really nicely, too. It can just take the general pains of the day out.”

Once Ryan is done snipping and soldering (there’s a lot more to it than that) and the time comes to get the enclosures painted, Shannon Ratajski gives the pedals a personal touch to tie the whole project together. When Fuzzrocious first started, even with her background in the fine arts, Shannon was initially a little nervous about painting the metal enclosures.

“She was a little reluctant in the beginning because she’d never painted on aluminum or anything like that. So, it was this whole new thing,” says Ryan. “It’s not that she had any doubts about her skill, because she knew that she was good with color theory and what she was doing with her art. I think it was a really good push.

“As soon as a couple of them sold, and people were so happy with it, I think that was the thing that made us say ‘Let’s just keep doing this. Let’s keep doing this week, and then we can make more, and just grow, grow, grow.’ And because we had normal jobs, we were allowed to cultivate them really organically, and not have to take a loan out, or this, or that. We just stepped it up slowly. Literally step by step.”

Shannon and Ryan have two children, Raeven and Kaeden, who were also excited to get in on painting the pedal enclosures. Fuzzrocious offered up these one-of-a-kind creations as a “Kid Painted” option, not knowing what the response from customers would be.

“They would always be painting with Shannon anyway, so we just put them in front of this. We knew it was gonna be Jackson Pollock splatter art stuff because they’re kids, but it would be unique, and we can just let it go that way. They both really enjoyed doing it, and it’s another kitsch factor of the company. Not only can it be hand painted by Shannon, but you could also get the kids to paint it. It just brings in the whole family deal.

“But, yeah, it’s really funny when you when you see these touring bands who are cool to gamble and see what this kid is gonna make them up, and put it on their [pedal] board. It’s pretty neat.”

The demand for custom, hand painted pedals grew to a point where both Ryan and Shannon, both working in the education system, decided to leave their jobs to focus on Fuzzrocious full-time. That dynamic worked for a number of years, but recently Shannon rediscovered her love for teaching.

“Shannon’s back in the classroom now, teaching because she really missed that a lot. We’re still both finding happiness in what we’re doing, and Shannon still does this a little bit on the side. It’s all about balancing what

Moving forward, Fuzzrocious Pedals have several new builds and collaborations on the way, including one set to drop later this month. But the next big event will be Winter NAMM in Anaheim, California in January.

“NAMM is basically like Comic Con for music gear nerds. We go out to California, set up a booth, and people can come and play our stuff. We get to meet dealers that want to bring our pedals into their stores, and that’s the big show for the year. So, that’s what we’re really looking forward to.

“Most of us in the industry start planning for it around July/August, in terms of what cool new thing you’re going to have there. Currently I’ve got some set on the breadboard, and I’m just waiting for more inspiration to hit before I jump back in.”

Fuzzrocious is an incredible, family-run operation that continues to pump out some awesome and innovative pedals.

Check out Fuzzrocious via the following:

Feature: This is Fuzzrocious: Know Your Pedal Smith