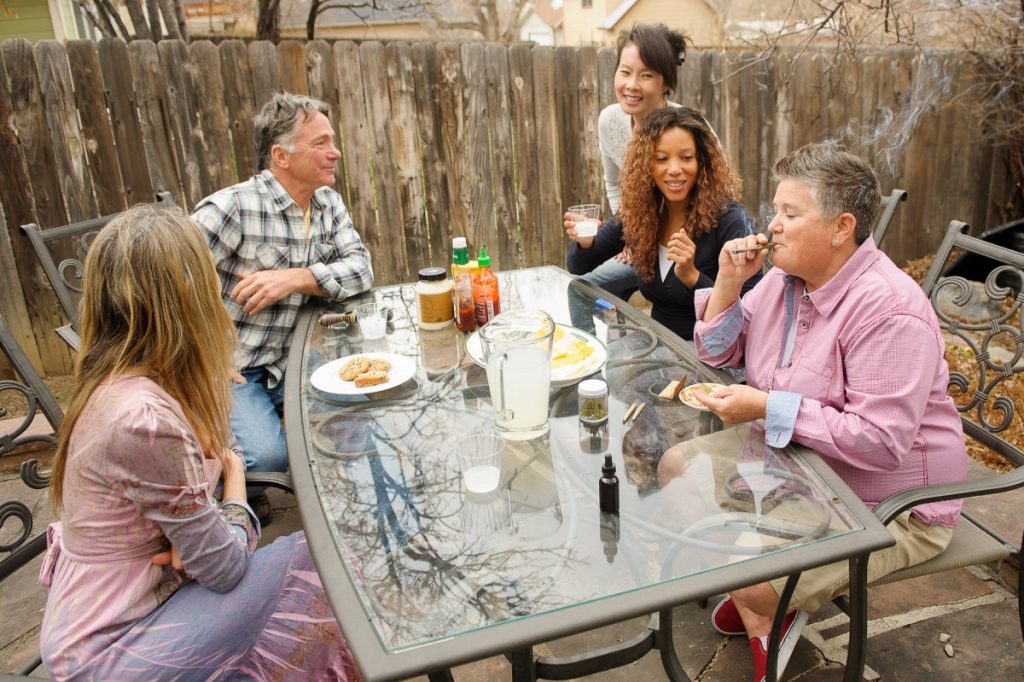 According to a recent report from Stats Canada, babyboomers smoke more weed than anyone. Yes, ANYONE. This includes YOU, and the rest of the 18-35 crowd. Now, I know when you think “weed smoker.” you probably envision a long-haired teen fist deep in a can of Pringles. You’re on the right track, but replace the long-haired teen with your bald-headed dad and ditch the can of Pringles with a jar of roasted nuts and you’ve gotten closer. Stoner moms and dad’s are on the rise.

Parents aren’t always open when it comes to their cannabis use, especially with their children, and for good reason. Because of this, the following news may come as a surprise and take a little while to sink in.

Logically speaking, it makes sense. Baby boomers have a long and storied past with cannabis, dating back to the good old days of the ‘60’s and ‘70’s. These are individuals who are over the age of 55, and more precisely, anyone born between 1945 and 1964. Why shouldn’t you be shocked that your parents smoke more weed than you? Well for one, they are the cannabis OG’s, and for the most part, their love for Mary Jane has never waned. Over the course of their adult lives, from starting families, buying property and stocking up on anti-aging creams, their marijuana habits may have shifted to adjust to their lives, but recent statistics indicate that they never quite stopped.

In 2017, the boomer demographic made up 23% of the total share of Canadian cannabis consumers. They aren’t just smoking recreationally, either. Many boomers view cannabis as an alternative to prescribed medications that cause unwanted side-effects. All in all, whether it’s recreationally or medicinally, your parents likely have a stash box of their own. The stats don’t lie – this is where we’re at: Babyboomers smoke more weed than most people.

The question now becomes; How Do I Know If MY Parents Smoke Weed?

They had THAT friend.

This friend of your parents wasn’t always around, but when they were, it was usually a good time for everyone. They’d bring you a little something on each visit and would always make you laugh. When you were curious enough to ask how they knew them, the answer was always vague and inconsistent. And for some reason, mom and dad never offered you ANY of the freshly baked brownies that “Uncle Steve” or “Aunt Lily” brought to the house. There’s also a good chance Lily and Steve were prone to wearing sunglasses inside.

Your dad is such a chivalrous guy. Whenever he took the fam out to dinner, he’d drop you and mom off at the restaurant’s front door and park the car on his own. But wait a minute, was that really just chivalry? Why, even when a spot was available directly in front of the establishment, did he STILL insist on dropping everyone off? I’ll tell you why. It’s because he had a small doob to hit on his walk from the car to the restaurant. It wasn’t a coincidence that when he sat down at the table, he expressed disappointment in the lack of appetizers on the table.

You found an industrial-sized bag of chocolate covered almonds under their bed.

While looking for an old magazine under your parent’s bed for a school project, you found a bag of chocolate almonds big enough to feed the entire population of a wildlife reserve for a week. You didn’t think much of it at the time, other than “y u hiding food from me, mum?”, but now it’s crystal clear. Late night munchies need not require a trip to the kitchen for mother.

They LOVE the Planet Earth series

Mesmerized by a great white attack and fascinated by marching penguins, your parents watched Planet Earth like it was the nightly news. You thought they were just into animals when in reality, they were high af. It’s safe to say that the combination of David Attenborough’s voice and raw footage of nature were soothing to their elevated brains. On the plus side, your parents are likely very spiritual people and over the years, they’ve accumulated enough knowledge on animals to appear highly educated on the subject at dinner parties.

They were way too trigger happy with air freshener

Did your parent’s room always smell like orange and spritz? Did they buy their air freshener in bulk at Costco? Well, it’s safe to assume they were trying to cover up more than what is generally needed after a trip to the washroom. You have cannabis to thank for your fresh-smelling home! Classic boomer move.

Who Ran Down Stone Cold? || The High Risk Maneuver

Sights and Sounds at the LIFT Cannabis Expo | Toronto 2018