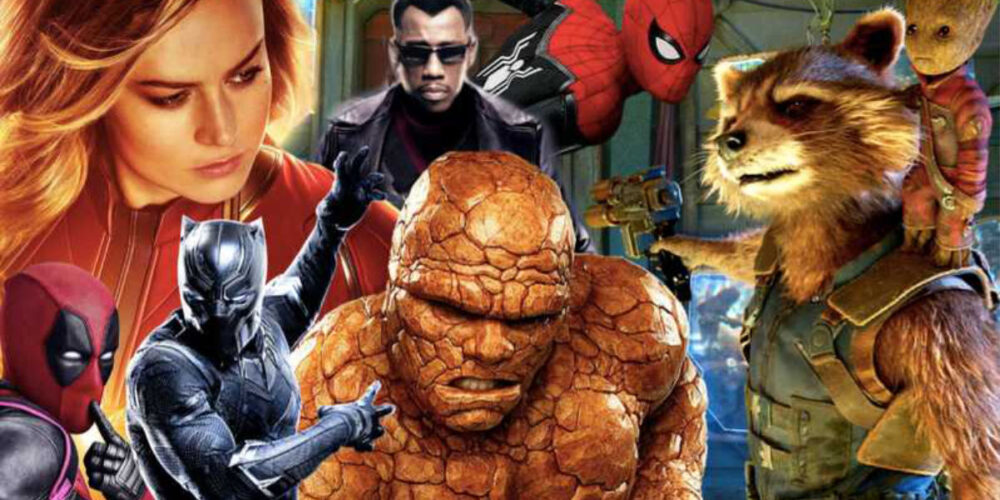 With timing that is so appropriate that it seems like it’s part of the MCU, the culmination of 22 films, Avengers: Endgame, surpassed Avatar as the highest box office earner in history. To celebrate this feat, MCU mastermind Kevin Feige came into Hall H at the San Diego Comic Con and dropped a Galactus-sized amount of news about the on-screen future of Marvel. The following is a rundown of the Phase 4 (and Phase 5!) info dump… *takes deep breath*

The first release of Phase 4, Black Widow will hit theatres in May 2020. Set after Civil War, Director Cate Shortland (director of Australian indie films Somersault, Lore, and Berlin Syndrome) helms the espionage thriller, which will feature (obviously), Rachel Weisz as Melina/Iron Maiden, and David Harbour as Alexi/Red Guardian. It will also feature the master of physical movement mimicry, Taskmaster, possibly as the main villain.

THE FALCON AND THE WINTER SOLDIER

The Falcon and the Winter Soldier (Image courtesy IGN.com)

Starting the parade of MCU releases on the Disney+ streaming service will be the torch passing of the Captain America mantle to Sam Wilson along with everyone’s ol’ pal Bucky. The production team includes John Wick writer Derek Kolstad, head writer Malcolm Spellman of Empire and the prolific director Kari Skolgland, responsible for episodes of a slew of shows including Handmaid’s Tale, Walking Dead, Punisher, House of Cards, Boardwalk Empire and The L Word. Anthony Mackie and Sebastian Stan will be joined by Daniel Bruhl, returning to his role as Baron Zemo from Captain America: Civil War. Bruhl was shown in a teaser video, in which revealed he will don the iconic purple mask featured in many Marvel comics.

November 2020 will see the theatrical release of the god-like cosmic superbeings The Eternals. Expanding the interstellar universe of the MCU will be the responsibility of Director Chloe Zhao and will include a star-studded cast including, Angelina Jolie as Thena, Kumail Nanjiani as Kingo, and Salma Hayek (who received an elated reception in Hall H) as the leader of the Eternals, Ajak.

SHANG-CHI AND THE LEGEND OF THE TEN RINGS

In spring 2021, Disney+ will release WandaVision with Elizabeth Olson and Paul Bettany reprising their roles. Teyonah Parris will be playing a grown up Monica Rambeau (from Captain Marvel). The tone and story of the series is said to be very weird and dark and will have a huge role in leading up to the Doctor Strange sequel.

Also in spring 2021, Disney+ will have Tom Hiddleston returning as Loki, and the series will attempt to answer the question of what happened to the alternate Loki once he escaped in Endgame.

DOCTOR STRANGE IN THE MULTIVERSE OF MADNESS

MCU: Doctor Strange in the Multiverse of Madness

The sequel will be Marvel’s first foray into gothic horror (although it will be rated PG-13). Aiming for a May 2021 theatrical release, the master of the mystic arts will be teaming up with Scarlet Witch.

Featuring alternate reality scenarios with familiar characters and stories much like the popular one shotcomics of the same name, the Disney+ animated anthology series will be released in Summer 2021, Jeffrey Wright will serve as the series narrator, voicing The Watcher. The series will also include almost every actor voicing their corresponding characters that have appeared in the MCU to date. Seriously, check out the list of featured voices, it’s awesome.

Jeremy Renner’s latest turn as the world’s greatest archer will hit Disney+ in Fall 2021 and will introduce Kate Bishop as his protege. The series will also fill in some details of Hawkeye’s time post-snap as Ronin.

Taika Waititi returns to direct Chris Hemsworth and Tessa Thompson in the fourth film featuring of the God of Thunder and newly appointed Asgardian leader Valkyrie. The surprise announcement for this project is Natalie Portman returning as Jane Foster and her elevation to superhero status as Lady Thor! The incredibly named Thor: Love and Thunder will be released November 2021 in theatres.

SEQUELS: BLACK PANTHER, CAPTAIN MARVEL, AND GUARDIANS OF THE GALAXY

Mentioned in the very end of Feige’s presentation when time was getting short, all of these characters will be getting new movies. No other major details were discussed.

Feige also very briefly discussed the further future of Marvel’s cinematic future, dropping a major bombshell about everyone’s favourite daywalker: Mahershala Ali will be portraying Blade! The absolute final tease of the presentation was the pending entrance of Marvel’s first family (Fantastic Four) and mutants (X Men) into the MCU.

Whew. It’s a lot to take in. Definitely an exciting time for fans of the MCU. The future looks bright with potential. The only missing piece of news: Keanu Reeves playing Silver Surfer. Get it done, Feige!