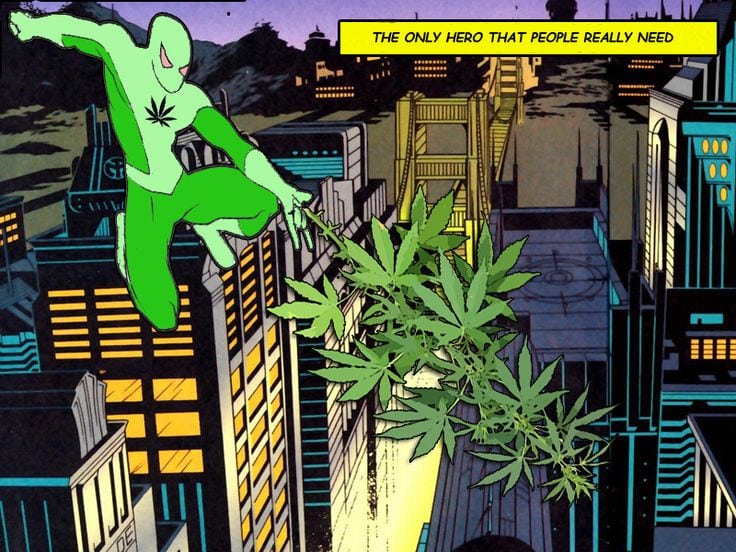 Superheroes have been idolized by all of us around the world since the first comics of their kind were published in the 1930s.

Superman, Ironman, Thor, Hulk, the Flash, and Batman have become household names for many of us. And now the dawn of Black Panther has risen and movie buffs all around the world are becoming superhero fans. Whether it’s the chase or the action-packed fight scenes, these superhero movies never cease to entice the weed community. It’s full of heart, pain, laughter and will keep you on the edge of your seat. So, maybe that’s why so many strains are named after superheroes, villains or their kryptonite!

The incredibly super-powered list of cannabis strains below is a testament to the effect of heroes and villains alike on just about everything.

This dark and dreamy cannabis strain may not relate in any shape to the Russian S.H.I.E.L.D. operative from Marvel comics. However, you can’t help but enjoy the name. This hybrid provides an exceptional head high with a remarkably intense euphoria. In addition, it provides a powerful happiness, deep relaxation, and a major case of the munchies. It has an original Brazilian sativa mother and South Indian indica-dominant hybrid father. Black Widow packs a punch that is great for combatting stress, pain, and fatigue.

This sativa strain is rumored to have begun in the 1960’s just like the Green Lantern. This lovely flower handles headaches, insomnia, and even depression. Its aroma suggests the presence of caryophyllene and pinene, which are terpenes that fight inflammation and promote focus. It’s definitely on the more potent side, so be aware when medicating with this strong sativa.

“In brightest day or blackest night No Evil will escape MY SIGHT!”

If you’re at all a fan of Spider-Man, then you probably know that throughout Peter Parker’s days as the hero, the Green Goblin was his arch nemesis. So, you must know the trademark laugh too? Furthermore, this sativas pungent aroma of the Goblin is overall musky and skunky with hints of that diesel fuel. In addition, the buds have a forest green color with rusty orange hairs. Its uplifting and euphoric side effects often leave people feeling silly and giggly. Green Goblin also aids in stimulating focus and creativity!

“You shouldn’t have raised the stakes and had me captured after all these years.”

If you need to put stress in a headlock with the strength of an Amazon warrior princess, then Wonder Woman is the one! The flowers have a mostly skunky smell with notes of fruit and jet fuel that can be stronger or weaker, depending on the plant. It is a lovely orange coloring with dense light green buds. The flavor will drive your creativity and guarantee a pleasant euphoric feeling. Offering you a powerful and long-lasting wonderful buzz!

“You are stronger than you believe. You have greater powers than you know.”