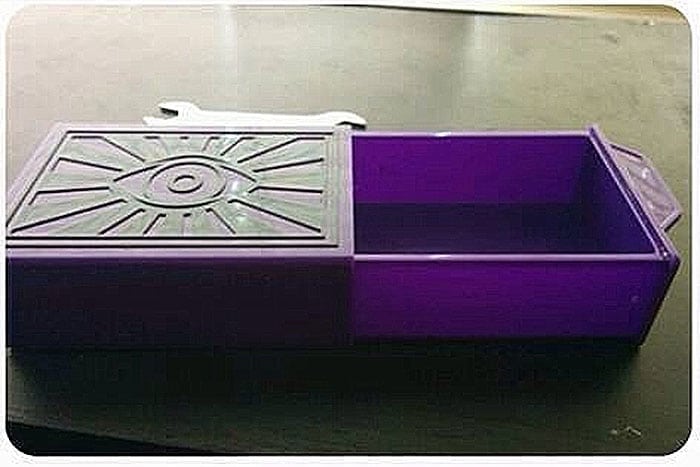 A Stash Story – Magic Stash Box; Now You See It, Now You Don’t

“You’re probably thinking I have a magic stash box because I need to be discreet with my smoking habits, or because I LOVE magic. That’s very fair! But ironically enough, my magic stash box doesn’t come from necessity, or even a love for magic. More like… a hate for magic? Okay fine, there’s obviously a part of me that likes to keep my stash a secret and safely stored in my apartment because you never know. Even though I live alone, it’s nice to have my weed and supplies are organized and stored in my magic stash box.

Move Over David Blaine, David Lame Is In The Building

As a child, I was always fascinated by magic. Weed and a magic stash box weren’t things on my mind. My parents even enrolled me into magic camp one summer in the early 00’s. Unfortunately, my undying love for magic had nothing on my lack of talent and skill. I was easily the worst kid at camp. The simplest card trick would give me anxiety and while I was initially annoyed that my parents only registered me for 2 weeks instead of the full month, by the end of week 1 I was beyond thankful that I wouldn’t need to endure magic camp for a whole month. By week 2, I had earned the nickname of “David Lame”, which made me feel nice. David. LAME. Get it? Cause David Blaine…

Why are kids such little assholes? One kid was the worst. Let’s call him Benjamin. Benjamin was relentless in his efforts to make me feel like crap and one day, I kinda snapped back.

“But can you even throw a SPIRAL?!”

Something someone who’s nickname included Lame would say, right? I know. But my thought process was, these kids are magic dorks, I’m an athlete and I hope all of your parents forgot to have you vaccinated. Unsurprisingly, my line bombed. It’s okay though, because none of those kids have an awesome

On the final day of magic camp, one of the “magicians” aka. camp counselor, gave me a parting gift. It was this little purple magic box. His reason for gifting me the magic box? “Take this home and figure it out.. if you can!” Nice guy – he didn’t think I’d ever figure it out. Wasn’t that cyber-bullying or something? Or like, regular bullying, I guess? What a jerk that guy. Little did I know, that box would eventually become my magic stash box.

I took the box home and when my dad saw it, he was super pumped. The box represented value to him. I got a FREE box so that definitely made up for the $2500 and torture I had to take. To me, the box represented sadness. Okay, okay, maybe I’m being a bit dramatic, but I HATED the sight of the box. I threw it in the closet and over the years, it got buried deeper and deeper in a pile of my undesirable items and just like that, it was “gone”.

A few years back, my parents brought over a bag of my “belongings” that I’d deliberately left behind when I moved out. What was at the top of the bag? You guessed it; the little purple magic box.

At first I was annoyed but after some time, I was able to see the humour in it. For the first time since counselor d-bag handed it to me, I tried to see how it works. Turns out it wasn’t that hard after all. As it turned out, I was in the market for a new stash box due to my last one falling apart. And just like that, this purple box instantly became my magic stash box. It’s served me well over the last few years in both storing my stash, and also as a conversation piece when I have people over. Turns out ladies love “magic”.“

Most cannabis enthusiasts have a special container in their life, just like this stash box with lock! It’s a container that holds many things very near and dear to their heart. Papers, grinders, filters and more, a stoner’s stash box can tell you a lot about the owner. Is it big? Small? Dirty? Clean? Organized? Or messy? What about the story behind it?

In a Stash Story, we try to reveal the personal touches to choosing a place to store your herb. Your stash box could be a gift, a discovery, or an epiphany. But we want to see it!