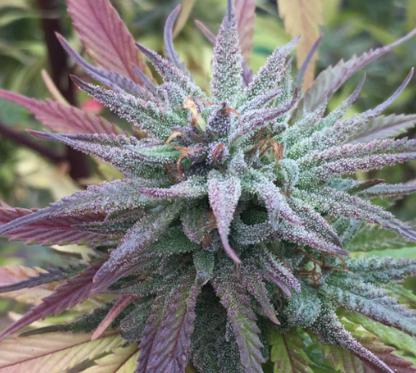 Blood weed isn’t what it sounds to be. No violent side effects or anything of that sort. This unusual name is given to it because of its blood-red leaves and stems. So no need to worry, quite the opposite actually. The Blood weed strain is a Sativa-dominant strain that comes from Hawaii and is enjoyed by a lot of people around the world.

The Blood weed strain is actually a distinct phenotype of the famed Kona Gold varietal. This truly valuable strain has its stock kept and maintained by the first Hawaiian seed bank. According to studies, the Blood weed holds a THC level of about 15% to 26%.

The appearance of the Blood weed strain

This strain is most often noted because of its beautifully colored flowers. They are covered in red all over and are truly unique in the cannabis world. It also has notably large buds in pretty irregular shapes that look rather chunky when compared to other strains. When you see them on the main plant, they look as if they cling together in a characteristically loose structure. All the plants of the Blood weed strain have red stems and deep red veins crisscrossing their broad fan leaves.

Also, when you trim the flowers they usually retain the traces of red in their leaves and pistils. Last but certainly not least, the trichomes. On the Blood weed strain, they are densely packed all over the flowers which makes this strain particularly psychoactive and they will also give you a hard time to break them up without the use of a good-quality grinder.

Why so popular? Well, if it isn’t for the color and its unique experience, this would be a nice potent Sativa that is able to knock you down after several pulls. This is especially true because of its high-trichome amount packing a powerful punch to it.

Negative effects of the strain via leafly.

Aromas and taste of the strain

Skunky scents prevail on this distinct strain with some flowery, dank and sour overtones. You can also sense some fruity, tropical aroma taking by its relative the Kona Gold on the exhale. However, when you grind the Blood weed you will feel its unique blend of a deep, woodsy aroma of pine. When you burn the plant you will notice at first that the Blood weed gives off an acrid smoke that can irritate the eyes and palate and may cause coughing. Then you will taste earthy tones with hints of citrus in your mouth. It’s truly a rich blend that will have you hooked. Be careful tho, especially if you are a newbie, cottonmouth and red eyes are this strain’s most dreaded side effects.

The effects of the Blood weed

The Blood weed hits very quickly and its potency may even give you a headrush just before you exhale the thick skunky smoke. Flushing in the cheeks is also something associated with the Blood weed just before its cerebral power becomes clear.

The monologue in your heads starts to get louder and louder with all the thoughts rushing in your head in an unconnected sense. For some, this kind of intense mental activity can be overwhelming, especially if you are in the wrong set and setting and with the wrong people whose negative vibes you will start feeling more intensely. However, for those of you who are familiar with the typical sativa high, you can really embrace this freely-associative thinking and enjoy its benefits to the fullest. You will find yourself discovering surprising new connections between seemingly unrelated things which will induce your creativity even stronger and may lead you to dwell on concepts or topics you don’t normally find amusing.

If you have social anxiety, the Blood weed will help you start up conversations in social situations and you will find yourself more bright and cheerful overall. It can also be helpful for accomplishing detailed, task-oriented work and open-ended creative projects like brainstorming. The Blood may also inspire a surge of physical energy on top of its mental stimulation and can provide the inspiration needed to accomplish a satisfying workout.

With all this being said, the Blood weed strain is great for daytime use, and with its
wide-awake vibes even for the popular wake-and-bake consumption.

Medical use of the Blood strain

medical cannabis patients can have some beneficial uses of this strain too. Namely, those struggling with attention deficit disorders can find aid by smoking it when they need to stay zoned in on a single task. The subtle euphoria will also temporarily relieve the symptoms of mild stress or depression, however, those struggling with anxiety should be wary as it can induce some of its symptoms with its mind-racing effects.

Furthermore, The Blood’s anti-inflammatory effects may also soothe irritations like headaches or cramps. But, because it can induce a much focused, cerebral mindset, The Blood is not recommended for patients who are prone to panic or paranoia or who have a low THC tolerance.

Black Hash: All the Types of Black Hash On the Market

Weed Juice: The Next Best Thing For Your Health