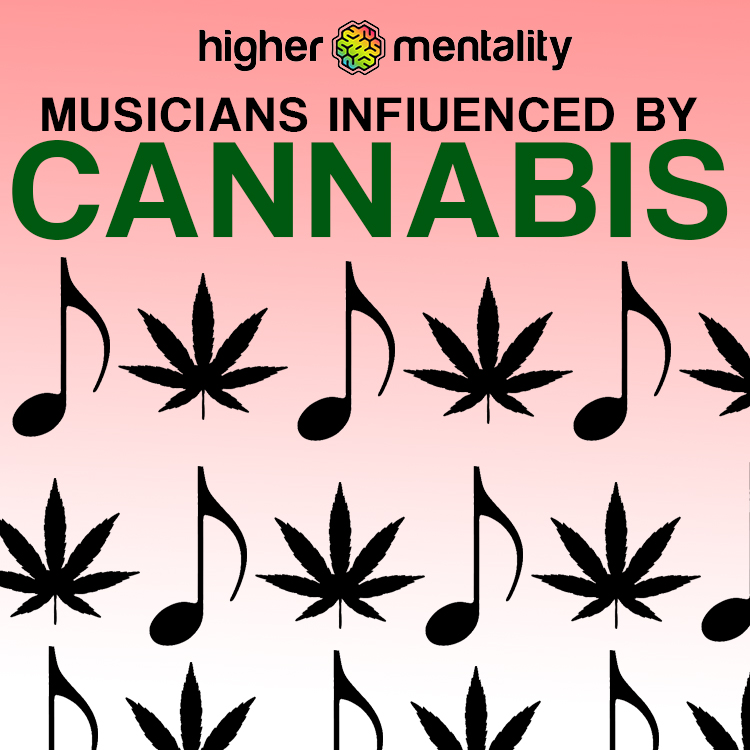 By now, everyone knows that the best artists are toking it up. If you’ve ever listened to music while high, it’s easy to understand how it can improve the creative process. Every note just thumps your skull harder when you’re high. Songs with nonsensical lyrics start to make sense. Music you may have been apathetic about starts sounding amazing. Music artists influenced by cannabis tend to make some of the most trend setting, cutting edge music around!

Instead of killing people or driving them to madness like the government claimed marijuana would do, it instead inspired some of the best music we’ve ever heard. Let’s look at some music artists whose work was influenced by the herb.

Let’s get the obvious one out of the way first. If you’ve looked anything up about The Fab Four, you probably know this story. In the beginning, the Beatles were your average, trendy boy band of the 1960s, singing songs to make teenage girls’ hearts throb.

Then, in 1964, Bob Dylan changed all of that. He introduced the four to the power of marijuana, and the 1960s really kicked off. You can definitely start hearing the influence of weed on their music. They went from poppy to experimental, putting them up with the other greats of the 1960s. If they didn’t have that marijuana, who knows if they’d still be remembered?

When you think of marijuana and music, you may think of psychedelic rock. However, one genre that has quite a few marijuana enthusiasts is country music, particularly old-school country. You see, a true country boy isn’t just sipping whiskey; they have a blunt alongside them at all times. Perhaps the most famous example is good ol’ Willie. Willie has done it all with weed. From smoking on the White House roof to getting caught with it more times than you can count, he has been a major activist in marijuana legalization.

Also, Nelson destroys the stereotype that stoners are lazy and smoking weed leads to an early grave. At 85, Nelson is still playing his music and taking advantage of the changing climate on weed. It is nice that full-on legalization will probably happen in his lifetime.

So far, these artists have been “no duh.” However, here’s one that may or may not surprise you. Timberlake, a man who has been a figure in the pop world for over 20 years, smokes as well. Not all pot smokers use marijuana to improve their creativity; some use it to unwind. Timberlake claims that marijuana helps him shut his brain off when he can’t stop thinking.

This seems to indicate that he may use marijuana to help with his anxiety. While marijuana can sometimes make you a little anxious, especially if you’re doing it in a place where you’re afraid to get caught, it also can help calm you down. We all have had nights where our brain wouldn’t shut off no matter how tired we are. For many, a good toke puts you to sleep much faster than any amount of NyQuil.

If you grew up in the ‘90s, you couldn’t escape Alanis. She always had one hand in her pocket, and the other was toking it up. Alanis has said music helps get those creative juices flowing. This is something that’s echoed with many artists. When an artist is having a writer’s block, a little bit of weed can help free those blockages. Alanis loves to smoke the herb, however, she understands boundaries as well. She said she understands that not all of her friends are interested in smoking, and that’s okay.

This is something all of us smokers need to remember. Smoking the herb is great, but it’s not for everyone.

When it comes to music artists influenced by cannabis, this is another obvious one. We can’t stress how much of an impact Snoop had on normalizing weed. With many artists, you know they were smoking it, and their lyrics could be about smoking it, but Snoop Dogg was waving that blunt out in the open. It’s a big part of his brand. Every stoner’s biggest dream, whether you like his music or not, is to smoke with the Doggy Dogg. He’s smoked everywhere, and during his Snoop Lion phase, he claimed to smoke 80 blunts a day. With most people, we’d say he was exaggerating, but this is Snoop we are talking about! He was born with a blunt in his hand, and he has played a big part in legalizing it.

Bob Marley, being interviewed after the show at the Fox Theater (Photo by Tom Hill/WireImage)

Let’s end this off with another iconic artist. When you think of music artists influenced by cannabis, Marley immedietly comes to mind. The iconic images of him smoking blunts and quotes about smoking the herb are everywhere. Almost 40 years after his death, you still see him everywhere, particularly in smoke shops. His songs about revolution and peace have played a big part in our culture.

However, it may be interesting to note that Marley’s smoking wasn’t because of creativity or because he wanted to. It was because of his religion. With Rastafarianism, smoking ganja is a big ritual.

No matter what the reason, though, his image has helped normalize marijuana. We’d love to peer into the alternative universe where he is still alive and watching as the entire world realizes the power of the herb.

Music Artists Influenced By Cannabis: And Pretty Much Anyone Else…

Obviously, not every music artist is on weed. Plenty of people have made great music while being sober as a judge. However, weed has helped many artists be creative or has helped them to unwind after a long day. And because many artists have money and fame, they are using that to help normalize and capitalize on marijuana. Snoop and Willie are two examples of that.

Imagine a world where these artists played the good boys and girls and followed the law. Their music would be so boring. Thankfully, they rebelled, and continue to do so to this day. Let’s hope they keep rebelling until the grand end when marijuana is legalized for everyone to use. Music artists influenced by cannabis will continue to light the way and open creative doors for others.

SEE RELATED ARTICLE  CBD Flower: What It Is And Why Should You Use It?
0 0 vote
Article Rating
Related Topics:cannabis
Up Next