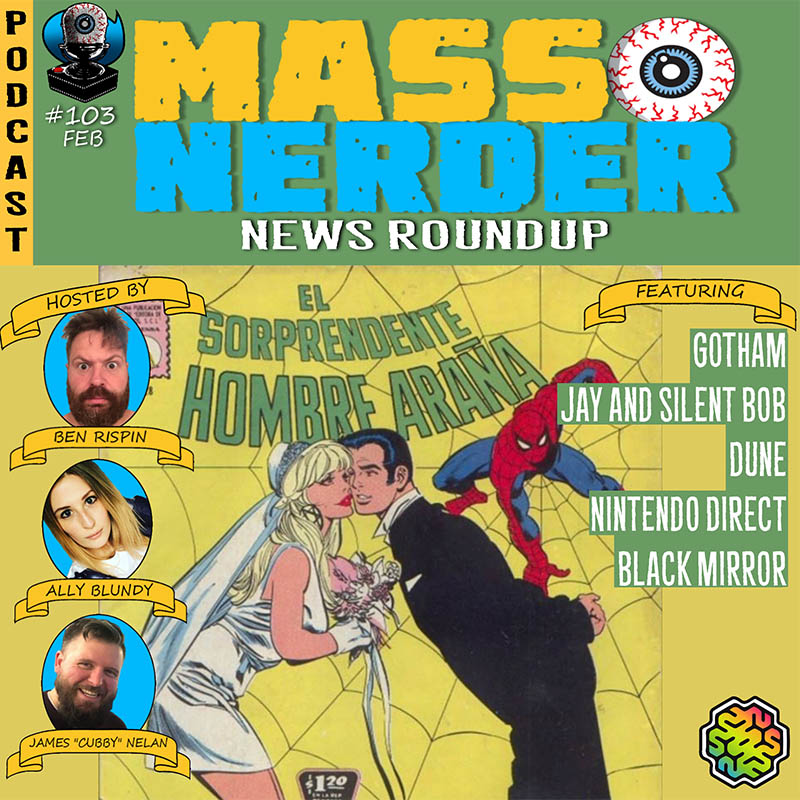 This episode of the MassNerder podcast, Ally, Cubby, and Ben get together and discuss a wide arrray of topics ranging from the ever so popular Mexican iteration of Spider-Man, Black Mirror and the Bandersnatch debacle among other things.

Make sure to tune into MassNerder 103 and get your herb handy for some entertaining and slightly strange discussion!

The episode opens up about the group discussing phone use and phone usage tracking apps. To no one’s surprise, Facebook comments are the greatest source of information and very alleviating. Nearly as articulate and intelligent as YouTube comments!

On a different note, the group mentions the 5 Best Marvel Movies to Watch While High, which we’ll all probably end up setting aside some time to burn through the list. The team discusses the upcoming Suicide Squad directed by James Gunn and all hope is outperforms the original release.

If you haven’t yet, it’s probably a good idea to check out the series Gotham. 100% rating on Rotten Tomatoes, a thrilling plot, and full of action! It earned Bens nod of approval and we’re sure it’ll do the same for you too!

Jupiters Legacy earns a mention and the way Cubby describes it excites us too. Dune is set to launch for 2020 after a few poorly done iterations. It’ll be split into two pieces to keep the stories integrity in check.

Getting onto Black Mirror and the ever so popular Bandersnatch, the group discusses the intricacies and implications the interactive episode had. For the uninitiated, you should definitely mark some time off your calendar and dive deep into the Bandersnatch experience.

Ally just booted up her Pateron page, so if you want to support her cosplays and show your support, head on over to that! Heading over to Star Wars, Ben and the rest put out their best possible Chewbacca impersonations. Unimpressive? Sure. Entertaining? Definitely!

The Press X To Get High crew pops by for a little bit and discusses the games they had on the list! The VODs are available with the full sessions available to watch whenever you like! Good lighthearted livestreaming with good hints of cannabis and comedy.

Check out the previous iteration, episode 102 of Mass Nerder, featuring Snake “The Jake” Reimer, a core unit for the Twitch livestream featuring cannabis and gaming – Press X To Get High!

Episode 104 of MassNerder focuses mostly on the 91st Oscars while touching base on Wolfman’s Got Nards and Alita Battle Angel. Check it out for a podcast full of Oscars discussion and both the high and lowlights of the ceremony.

You can follow the team of @massnerdercast at their respective Instagram pages below if ya want ti stay up to date with the team and their thoughts. Make sure to tune in frequently to Mass Nerder to get the most up-to-date news as the best podcast for comic, gaming, and movie discussion!

SEE RELATED ARTICLE  6 Marijuana Board Games You Need to Try with Your Friends
0 0 vote
Article Rating
Related Topics:mass nederweed
Up Next

Mass Nerder – 91st Oscars and News Round Up