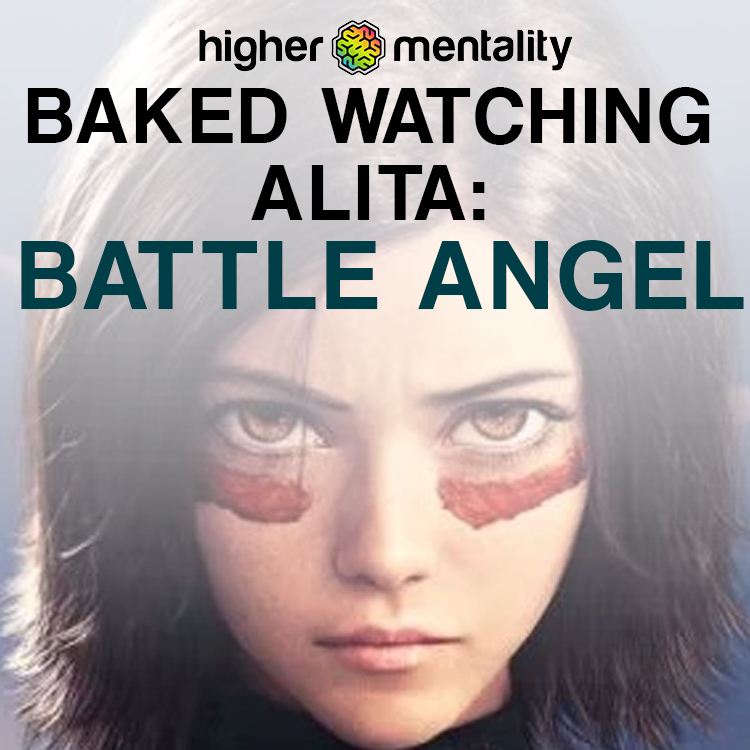 I Was Super Baked When I Watched Alita: Battle Angel:

I did not know much about Alita: Battle Angel before going to see it. The only thing I knew was that this film has been a long time coming.  James Cameron’s large scale projects always seem to have huge delays but even with that in mind, this thing took FOREVER to get made. Twenty years of various stages of production can be a massive challenge to overcome; I must admit, I had very low expectations. But the trailers were visually intriguing, so at the very least I was prepared to enjoy it on a purely ocular basis.

After eating a square of a tasty shatter chocolate bar and smoking some of my favourite Sativa, I sat in my local theatre (recently equipped with amazing reclining chairs) and waited for the movie to begin. My classic five categories that contribute to a great baked movie experience are Story, Jokes, Music, Visual Stimulation, General Radness.

As I stated earlier, I was generally ignorant of the story of Alita before going to the theatre, and this was likely the best possible way to experience it. Going in without any notions of how the story should play out in regards to the source material gave me an unbiased look at the movie. And an unbiased look is something I greatly appreciate after so many adaptations of my favourite characters and stories over the last decade.

Alita doesn’t take any great risks but it gets to the point. It’s a slow burn off the top (insert weed smoking wordplay here) but it still does not waste time.  I appreciate directness in Science Fiction because it can lose focus more easily than most genres, given it’s natural disconnection from reality. The further away the fictional world exists from our everyday experiences, the more necessary a balanced, grounded story can be. There’s some newspaper blunt-sized suspensions of disbelief to get fully on board with the plot, but the payoff is more than worth it.

There’s some heavy-handed foreshadowing, some clunky romance beats, and an abundance of supremely cliche dialogue peppered in. However, none of that got in the way of me enjoying myself.

There isn’t a ton of humour to latch onto in this movie, but it does have a light-heartedness that plays really well. Christoph Waltz’s charm goes a long way to setting the tone. He’s just so damn likeable. Other than a few chuckles, there isn’t much levity to be found. This isn’t necessarily a condemnation, but it could have helped give the characters a bit more depth.

Similar to the humour, the music/score is not the focus of the movie. The score works well as a reflection of the style and setting of the story. In many ways, the best thing that could be said about the music is that it doesn’t distract from the the biggest and best aspects of Alita. It’s not the kind of immersive sonic experience that swallows your toasty, stoned brain, but it doesn’t derail you from the movie’s greatest strength, which undoubtedly is…

In classic James Cameron fashion, the effects are marvellous and engrossing. It’s tremendously easy to slip into this dystopian ‘paradise’ filled with homicidal machines and rollerblading battle-Quidditch. This world of spare part cyborgs really comes together in an exceedingly enjoyable way. As a lover of Sci-Fi, I’ve had many impressions of the organic/robotic beings with a long list of successful and horrendous portrayals of them. Though, I have to give credit where credit is due: these are some cool fucking cyborgs. The gargantuan beast Grewishka (voiced by Jackie Earle Haley with some cryptic homages to his horrible Nightmare on Elm Street remake), the hunter-warrior pretty boy Zapan (played by Ed Skrein with all the wit of a 3rd-rate evil Jude Law), and the rest of the weirdo human-ish machines in between, truly showcase the care that went into creating these beings.

Alita should be rife with typical Uncanny Valley issues but it mostly stays away from the creepy and off-putting inhuman qualities that can plague these effect styles. My favourite visuals, unsurprisingly, come from the excellent fight sequences, which naturally grow in scale as the story moves along. The second showdown between Alita and Grewishka, in particular, is captivating and original in its execution, and also highlights how violent this movie can get. Director Robert Rodriguez got away with maintaining a PG-13 rating despite some tremendously visceral shots by enacting great bodily harm on screen against the cyborgs rather than the humans. But the starkness of watching characters getting ripped apart is not lost despite them not being fully flesh and bone humans.

I didn’t opt for the 3D showing but I was not disappointed. The visuals of the movie held up fine without it, but my dopamine levels were spiked enough that I’ll likely return to check it out with the glasses on.

I went into this movie as a way to switch off for a few hours. I ended up immediately engaged and thoroughly entertained all the way through. I was supremely high, but that does not explain how genuinely Rad I thought this movie was. I’m unapologetically into it.

Holy shit. I mean, I really fucking liked it. It’s unabashedly filled with archetypes, some simplistic story development, and it doesn’t expect the audience to do a lot of heavy lifting but it’s fun as hell and it looks fucking great. I’m probably gonna go get lit up like a post-apocalyptic cyberpunk oil-drum fire and watch those crazy robots tear into each other in 3D.

SEE RELATED ARTICLE  Five Scientists Who Smoked Weed and Made a Difference
0 0 vote
Article Rating
Related Topics:cannabisweed
Up Next