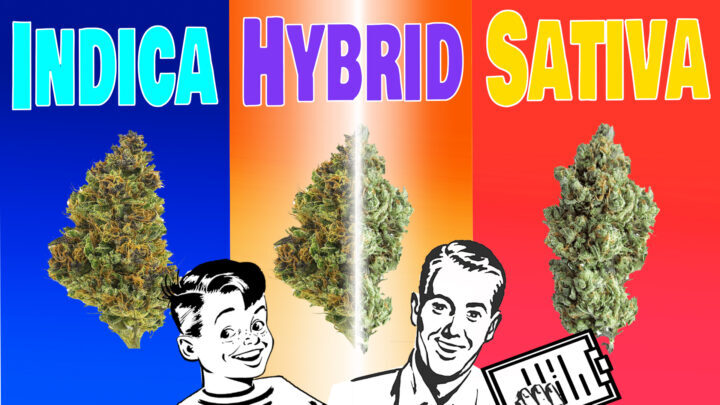 Here is a lesson for you, little Timmy: not all mareajuwana is the same. That’s one thing that marijuana propaganda film missed. It didn’t talk about the many, may strains weed has. Just like real lettuce has many types, the devil’s lettuce has many types as well. Much like a Communist, a fascist, or a globalist, or a scientist, reefer comes in many strains.

When you look at strains, they are typically divided into three different categories. These categories are:

Indica-Not to be confused with Indiana. This plant is stout and girthy, just like my… cigar I smoke whenever I want to unwind. Of course, not a reefer cigar, but made from pure tobacco. It is said to give people who smoke it a relaxing feeling. In other words, they become lazy stoner degenerates who have no use in this American society.

Sativa-Not to be confused with the sugar substitute. This plant is tall and towering just like my love for America before reefer took it over. This strain is said to give an uplifting, cerebral feeling. It may encourage you to think differently. As you may know, critical thinking is the devil’s tool. It causes people to question authority, question marijuana propaganda, and not conform to what others believe. Oh, the humanity.

There is also ruderalis. This is the best cannabis plant because it doesn’t get you high. It is not a threat to the fabric of America, so I’m going to ignore it for now. Go home, you silly plant.

When you go into a mary iguana store, and God help you if you somehow decide to go in there, you may notice that these strains come in different, quirky names. These may include:

And of course, you’re going to die when you smoke it you Commie.

And much more. All these are genuine names that I found after I investigated a marijuana shop in Colorado. More like Colonrado. I saw the strains for myself and almost vomited.

You may wonder what are the differences between all these types of marijuana if there are only three strains cannabal is classified under. Well, while strains under the indica category have the same structure, some of their chemicals may be different.

Some strains may have more or less myrcene. Myrcene has many effects, such as:

Lower than 0.5 percent is sativa, and vice versa. Either way, it’s evil and you can know more by checking out some marijuana propaganda.

These strains have terpenes that distinguish them from each other. Some terpenes can be found in foods. The strain may taste a bit like the food it was named after. You may try Cherry Kush and taste a bit of cherry, but you’re actually tasting Satan’s chapstick.

Hybrids are made when different strains are combined. The evil scientists are working day and night in their church of Scientology to create some of the most evil strains imaginable, including:

Sativa/sativa, where two types of sativa plant are combined. The same applies to indica/indica. Sativa/indica has a dominant sativa plant and a recessive indica plant, and vice versa.

Now then, we have talked a lot about the types of strains, but did you know that none of this matters? The name of the plant doesn’t tell you what you’re going to feel after you smoke it. What do I mean? Let’s look.

Bob Marley’s favorite strain was a Jamaican Lambsbread, a setiva strain. It gave Marley his evil powers of wanting peace and love. Anyway, Lambsbread has similar makeup to an Indica plant found in Afghanistan, the land of the terrorists.

What I’m saying is that what it’s classified under is irrelevant other than classification. How the plant is harvested, how it’s fertilized, how it’s bred, and how many times Satan has farted on it can affect its design. This leads to the entourage effect. AKA the teamwork effect, but that doesn’t sound cool enough for those commies. How much THC, terpines, and how many evil spirits Satan has put into it can affect it much more.

In the end, it doesn’t matter. Indica, Setiva, and other classifications are just ways dumb stoners try to classify their devil’s lettuce. Instead of trying to figure out if a strain relieves pain or puts you to sleep, instead worry about how you’ll spend eternity in hell as you dare to smoke the devil’s lettuce. This has been your good old fashioned marijuana propaganda lesson for today. Until next time, proud Americans.

I Couldn’t Get High Enough to Enjoy the Umbrella Academy