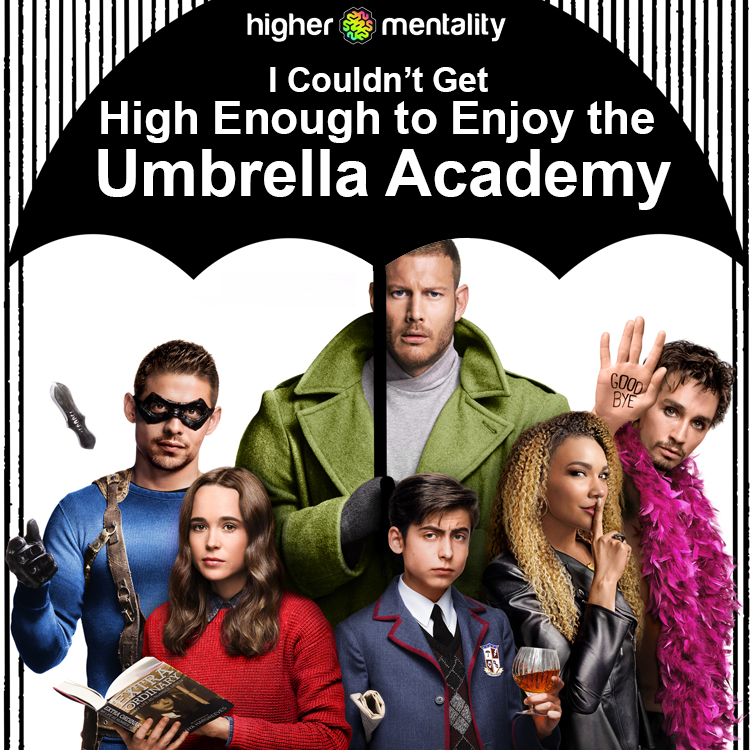 I Couldn’t Get High Enough to Enjoy the Umbrella Academy

When I sat down to delve into Netflix’s newest crack at a comic book adaptation, I was naturally interested in the show on various levels. Firstly, it’s filled with a bunch of great music. Secondly, It was shot in my hometown. Thirdly, I fucking love Ellen Page. Finally, the basic setup of the story which is: A selection of 7 out of 43 infants all born on the same day to non-pregnant mothers are collected together by a cracked billionaire to form a team of superheroes. On paper, all these elements together should equal an enjoyable result. Unfortunately, the whole was NOT equal to the sum of its parts. Even more unfortunately, no amount of baked-ness could get me past the weak execution of this production. My standard categories for medicated enjoyment of shows and movies were applied: Humour, Music, Visual Stimulation, Story, and General Radness.

It ain’t really funny, but it’s kinda fun. The show is somehow able to take itself way too seriously and also not seriously enough. Sometimes the tone of melodrama that blankets the entire show is used as a springboard for jokes, and sometimes it’s used to try and heighten emotion. What results, are jokes that don’t land and dramatic emotional moments that come off as laughable. The lone shining light is Robert Sheehan as Klaus, or Number 4 if you prefer. He is doing all the heavy lifting, hilariously delivering over and over again as the group’s drug-addicted, ghost-communicating fuck up. Ellen Page is also trying her hardest, but doesn’t get much to work with. The rest of the Academy isn’t really likeable, which makes it extremely difficult to find them funny. No giggle fits to be found in this show (although Klaus got me close a few times).

Don’t get it twisted, there are some choice song selections in the series. I legit recommend watching the first episode just for the fight scene to “Istanbul (not Constantinople)” by They Might Be Giants.  The full house dance scene, featuring Tiffany’s “I Think We’re Alone Now” should have hit all the right buttons as it’s shot wonderfully and the cast truly gives it their all. However, the scene occurs before you’ve had a chance to really meet the characters and become invested in them, resulting in an awkward feeling of watching something too private, something that you haven’t been fully invited to see. In a vacuum, the soundtrack should have tickled my stoned mind in all the right ways, but the setups to the song placements are jarring. It’s almost like you’re watching the show at a house party and someone in the next room keeps on blaring their favourite song without any warning.

Here’s where Umbrella Academy shines. There is an excellent shot after excellent shot contained within this bland story. A tremendous amount of effort was put into the costume choices, set design and overall visual tone of the show. Unfortunately, none of this effort could fully connect the disjointed aspects of the rest of the production. Making a supercut of great looking moments would be easy, there is a ton of material to work with. This could explain why the trailer for the show got me so amped up. If the show didn’t keep diverting attention away from the strength of it’s visuals, it would be way more fun to eat some “special” treats and sink into your couch to binge-watch the first season.

Umbrella Academy should have been called “Days of Our Lives of the Future Past.” This combination of Superhero and Soap Opera results in some clunky and ridiculous dialogue, which greatly hurts every relationship in the show. The plot walks along at a snail’s pace and reveals each predictable turn well before it arrives. There are many lengthy, drawn out scenes that aimlessly meander around before eventually arriving at the point. In a lot of ways, the overall running time of the first season is its biggest problem. You could probably cut a full episode of material out and it would be a much more concise and enjoyable narrative.

Despite some of my harsh criticism, there’s a decent amount of Radness to be found. With a little more subtlety and depth, the arc of the story would have been more than just waiting for Klaus to come back on screen. The second season of the show has great potential depending on what direction the story ends up taking. With some bolder direction and character development, this show could actually be phenomenal.

I’ll be the first to jump back on board this show if it finds its way in the second season. It’s surprising how simultaneously close to and far from hitting the target the show can be. For now, I’ll keep my fingers crossed that they can turn this baby around.