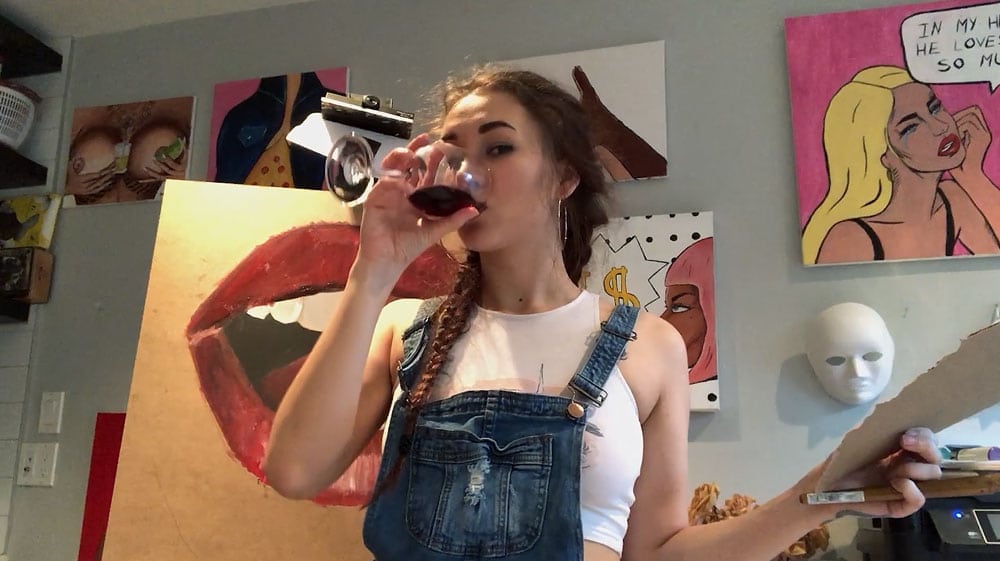 When you combine the joy of painting and the bliss of boobs, you’re left with a titillating on-camera learning experience featuring the one and only Boob Ross. You can stop the squinting and second guessing because you read that right. Boob Ross is her name and getting high to paint masterpieces is her game.

Low and behold, It’s the Bob Ross remix we’ve all been waiting for, and its only on HigherMentality.com

Who is Boob Ross?

Boob Ross (Sasha) is Russian/Canadian artist and on-screen personality well known for her painting tutorials. Her show, “Painting with Boob Ross,” is like a Bob Ross remix, only with weed, wine, and wider smiles. She goes by Sashaforfucksake on Instagram and runs an Etsy shop called “Peculiar Art” selling her painting and work.

“just a woman trying to paint.”

You can check out her artwork here

Everything Will Be Used – Wine Included

In this episode of “Painting With Boob Ross”, Boob R. took the time to mix her weed and alcohol prior to mixing her colours on her makeshift pallet.

“At first you might think that some of the items here are not going to be needed, but everything has a purpose.”

In that moment, we can see Boob Ross pick up her glass full of red wine, and guide it to her mouth. Speaking of mouths, that’s exactly what she decided to paint for us this week. A beautiful, red-lipped mouth with teeth that would make any orthodontist gush.

Drink up!  It’s not a boob Ross video without a little bit of vino 😉

One Woman’s Garbage is Another Woman’s Gold

“You might think that this is garbage, but if you’re a poor art student, this is very valuable. Its called a pallet.“

As she tries to get her brush wet, she realizes that she’s slightly off target. Guess that wine has kicked in!

“My hands are drunk!”

Boob Ross takes us to creative church and continues to work on her mastermouthpiece. With the lips taking full shape and colour, we’re beginning to see the painting come together.

As always, humour is as important to her as the art itself. In fact, her humour is part of the art, an element that has allowed her to separate from the pack.

Pointing to her hips, she brings a hearty dose of self-deprecating humour.

“Rolls are beautiful. Especially when they’re covered in cinnamon…”

When all is said and done, her mouth looks great. And the painting too.

Don’t worry if your art doesn’t look as polished as Boob Ross’, she understands that not everyone is the next Monet.

20 More Tweets to Make you Squeak with Laughter