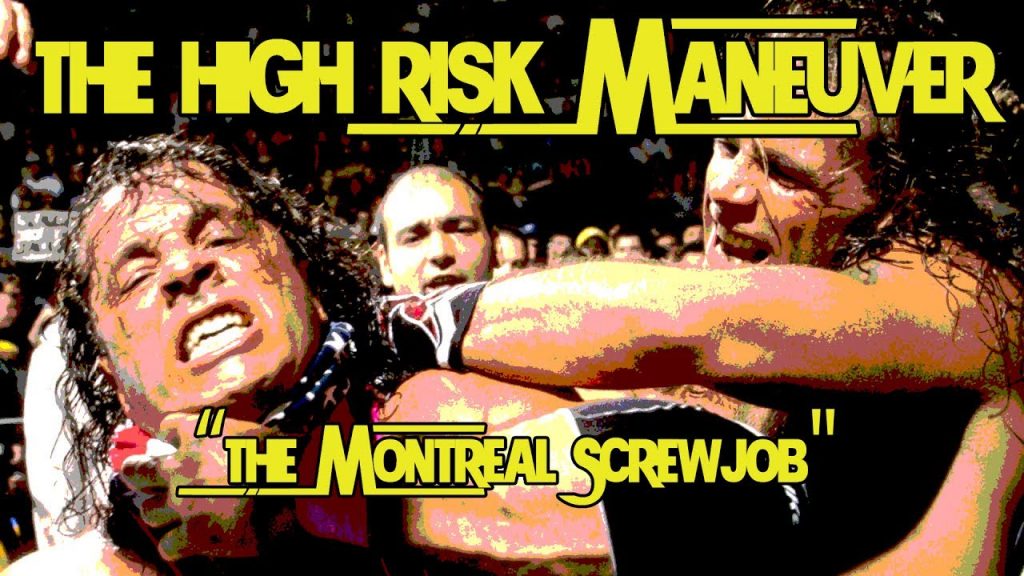 On this episode of The High Risk Maneuver, Tyler discusses The Montreal Screwjob, debatably the most mind-boggling thing to ever happen in professional wrestling.

This story hits close to home, because I’m actually from Montreal and I was actually in attendance for this event. I believe I was 9 years old when it happened, so I didn’t truly understand the gravity of the situation. Up until The Montreal Screwjob, pro wrestling was a fantasy world featuring wild, imaginative, unfathomable storylines. The wrestlers never broke character or let the audience know that it was all just a show in reality.

However, on this fateful evening in November of 1997, the wrestling world was hit with a hard dose of reality. You see, Bret Hart was the reigning world champion but his contract was coming to an end. Both he and Vince McMahon knew that he was leaving to join the WCW, the WWF’s direct competitor, so they decided to brainstorm a respectful way for Bret to lose the title before jumping ship. Vince knew he couldn’t let Bret leave as champion, or risk Bret bringing over the company’s most coveted title to their rival’s show, so the goal was to get the title off of Bret’s waist in a way they’d both be comfortable with.

Bret Hart, being a proud Canadian, didn’t like the idea of losing his championship in Montreal at the annual Survivor Series pay-per-view. He also didn’t love the idea of losing his title to Shawn Michaels, a man who he detested in a very real life, non-wrestling kind of way. After some careful negotiating, Bret agreed to lose to Shawn, but he’d do it the night after Survivor Series on Monday Night Raw.

This brings us to Survivor Series 1997, where Bret Hart faces Shawn Michaels for the world championship. As mentioned above, the agreed-upon outcome was for Bret to win, then lose the following night before leaving for good.

For those who aren’t aware, wrestling matches typically have a pre-determined outcome before getting started.

That isn’t what happened, though. Mid-way through the match, Shawn Michaels applied the Sharpshooter, Bret Hart’s signature move, on him. Suddenly, the referee was telling the timekeeper to ring the bell and announcing Shawn the winner. Bret never gave up, but they announced that he did. At this time, Vince McMahon was the on-screen commentator and only those within the industry actually knew his role as CEO of the company. With one swift spit to the face from Bret Hart, it became very apparent to the entire world who was really pulling the strings.

Vince totally pulled a fast one on Bret and sent him packing in the worst possible way. Bret, having just been completely and utterly blind-sighted by the company he dedicated a huge chunk of his life to, went absolutely berserk. Aside from spitting in Vince’s face, he smashed a bunch of expensive TV cameras and monitors, then went backstage and confronted Vince, allegedly punching him in the face and giving him a massive black eye.

As a young, impressionable viewer, this was a lot to ingest. Not only did it pull the curtain on the realities of wrestling, but it unveiled the nasty business side of things. I’ll never forget that feeling of confusion, thinking this was all just part of the storyline and that Bret was probably in on it. To this day, people still aren’t sure who knew what was happening and who didn’t. I certainly didn’t.

Rob Fee Gives us his Sorry to Bother You Movie Review