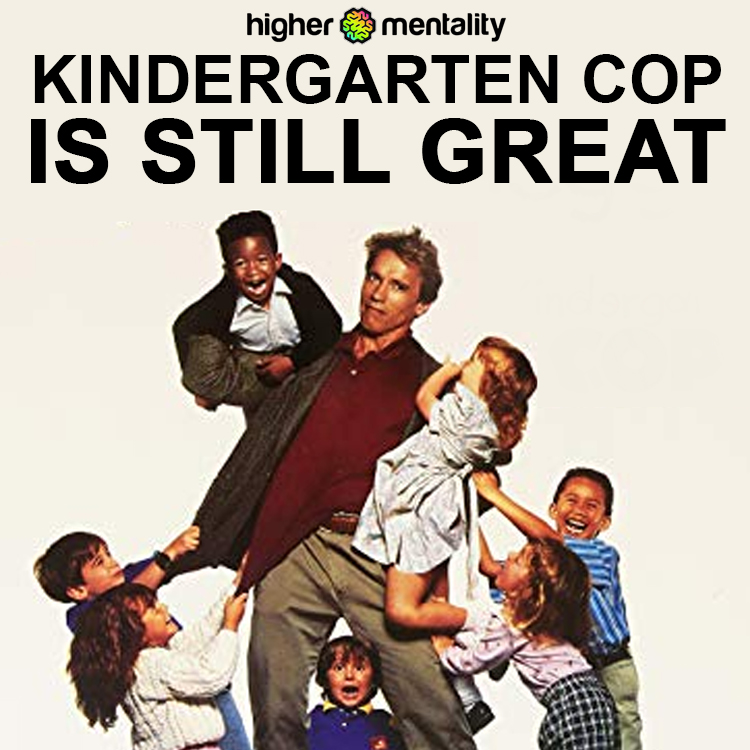 The reason I’m writing an article about KC though, is fairly simple. I love taking a quiet stroll down memory lane. Considering some of my questionable drug-related choices in my youth, some of the quiet strolls more closely resemble a jaunty stumble down a hill into a swamp. Despite that, there are memories that have left a deep impression on me, and many of those memories are related to movies I watched in my juice-box years.

I was definitely a child of action movies, and like many folks of my vintage, I was always excited as hell to see Arnold Schwarzenegger in whatever damn movie he was going to be in next. This excitement extended whole-heartedly to Kindergarten Cop, one of the slew of great comedies made by Ivan Reitman. When Netflix added this gem, I knew exactly what I had to do. I got as toasty as cooked bread and popped this bad boy on to see how it holds up.

Watching KC again was like putting on track pants fresh from the dryer: comfy and warm. This movie smacks me in the damn face with nostalgia. It’s silly and sentimental.  It’s funny and fluffy. I watched this movie a TON of times as a kid when I was home sick from school. It goes well with Campbell’s Chicken Noodle Soup and saltine crackers. Give me this movie and The Princess Bride and I could probably recover from the Black Plague. There’s something very comforting about a giant hulking action star trying and failing to control a group of adorable bratty kids.

KINDERGARTEN COP IS STILL GREAT…but Is it Really Still Funny?

The jokes still land! Watching hard-ass Schwarzenegger scream at child actors will never cease to be funny. There’s a bunch of fish-out-of-water fun at Arnie’s expense before the movie takes a sappy emotional turn about two thirds of the way through the movie, but even that doesn’t dampen my enthusiasm. The kids are what really make it great, with a combination of one-liners and honest child-like reactions. In general, there’s a great amount of quotable dialogue, but arguably the best line:

It still slays me. This movie is funny, I don’t give a shit.

Sooooo How Much Sexism, Racism or Homophobia Does it Have?

Nowadays, whenever I’m going to check out a movie from my younger years, I’m always bracing for some insensitive moments. Luckily, Kindergarten Cop is pretty tame throughout. There’s very little blatant examples of the above mentioned gross qualities. There is some heavy-handed male savior story beats, as could be expected from an Arnie movie of this era. Even so, at least there’s some female characters with recognizable personalities, most notably Schwarzenegger’s food-obsessed partner Pheobe O’Hara (played exceedingly well by Pamela Reed) and the school’s scowling and perpetually unimpressed principal (played by ACADEMY AWARD WINNER LINDA HUNT, you friggin ungrateful jerks). Overall, I’m just glad that there was nothing blatantly icky in the movie, except maybe the antagonists…

There seemed to be a bunch of mom and son villain duos in 90’s movies, and there was always some kind of slightly off-putting closeness between them. These two were no exception. The Matriarch, Eleanor Crisp and her son Cullen are creepy in that way that makes you think she bathed him nightly until he was well into high school. They’re both shark-eyed psychopaths who are obsessed with getting Cullen’s son back, even if they have to kidnap him, burn down his school, and threaten to straight up murder him. They way that Richard Tyson and Carroll Baker play them, it would be just as easy to believe that they were trying to get the kid back to cook and eat him.  As a side note, in this movie Richard Tyson looks like Channing Tatum went on a year-long bender in Mexico and then robbed a Hugo Boss outlet.

Who am I writing this article for? I’m not quite sure. But I’ll tell you this much, I didn’t fully realize how deeply ingrained in me this movie was, and I can’t be the only one. How can you not love the mediocre hilarity of a big dopey tough guy surrounded by rug rats?