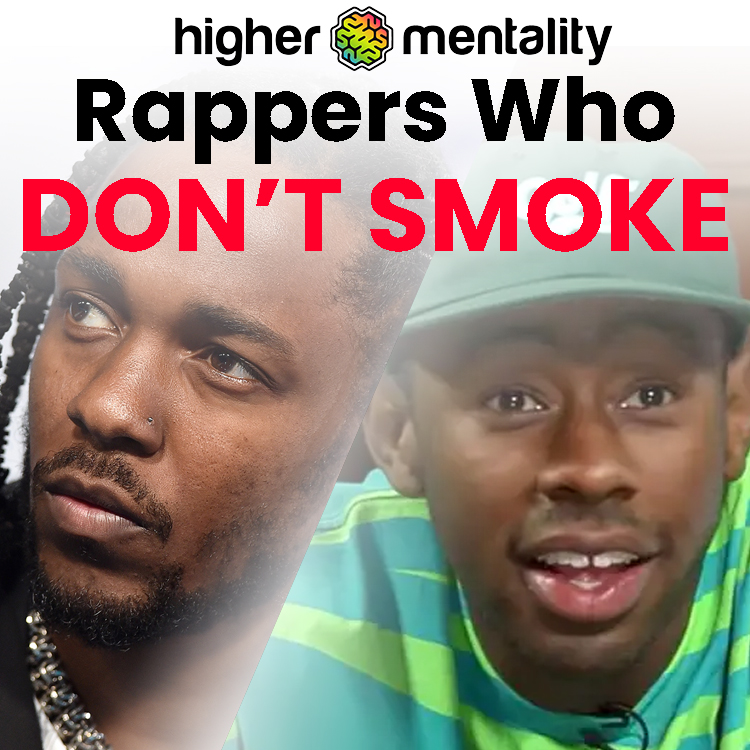 When you think of rap, what do you think of? Money? Fame? Women? Rolling up a blunt? The latter may not be the case for these rappers.

When it comes to famous musicians, there is quite an interesting binary. Musicians either seem to be drowning themselves in booze, pills, and enough cannabis to fill up a dispensary, or they are straight edge and don’t take any drugs, ever. Not even the caffeine found in a can of Coke. Today, we’ll be looking at some rappers who don’t smoke cannabis.

Since the early 2010s, Tyler’s rap career has dominated the weird side of the rap scene. Who doesn’t remember rolling up one while listening to some Odd Future? Well, not Tyler. Tyler remains quite straight edge, and he claimed that it was because of one bad experience with an edible, which left him crying. Granted, he doesn’t seem to be against anyone else using it; it just isn’t for him. Which is quite fair. Cannabis is amazing, but not for everyone.

With that said, if you’re going to get into cannabis, an edible may not be the best first experience. It hits you when you least expect it, and if that brownie is potent, it can freak anyone out. All those memes about people complaining about how edibles don’t work, only to be stoned out of their minds is quite true.

Kendrick is one of the few rappers who don’t smoke cannabis. Being such a big name in rap, you figured he would be smoking, but nope.

Kendrick used to smoke, but discovered it was not for him. It’s as simple as that. His friends did, and he tried it a few times, but ultimately decided that it wasn’t his thing. Again, that’s fine. Cannabis isn’t meant for everyone. If you don’t want it, more for us is what we say!

This one is surprising because Kid Cudi has such an associating with smoking cannabis. For his fans everywhere, this is a rapper you simply light one up to. However, Cudi surprisingly doesn’t smoke anything. He simply quit smoking around 2011, and yet he still raps about smoking. We suppose anyone can rap about things they don’t participate in, and that’s okay.

For over 20 years, Eminem has been a big name in rap, and his early work talks heavily about his role with drugs. Not just alcohol and booze, but the bad stuff as well. During his Recovery album, he wrote about his struggle with staying sober. Eventually, he managed to quit altogether and now Eminem remains sober and has a hard time relating to his older music.

Sometimes, cannabis can be lumped into other hard drugs, and that’s a shame. It gives fuel to the argument that cannabis is a gateway drug to the bad stuff. Alcohol gets a pass, but not cannabis.

Andre is an interesting case, with his claim of being cannabis free since the late 1990s. He was another rapper who used to smoke a lot, but now he’s a part of the group of rappers who don’t smoke cannabis. So why did he quit? He used to smoke and drink a lot, and he claimed that this ended up taking control of his life. So he simply up and quit one day.

There have been many debates as to whether or not cannabis is addictive. Some say it’s not addictive whatsoever, and others say that it has a habitual addiction, but not as much of a chemical addiction as harder drugs. Cannabis has not had as much research done on it as it should, and we’re not here to answer whether or not it is addictive.

What we will say is that it’s possible to have too much of a good thing. If you feel like you’ve been smoking too much, dial it back a little.

Cee-Lo stopped smoking around the late 1990s and has remained sober ever since. Why did he quit? Simply put, he had an anxiety attack and didn’t want to do it anymore. Simple as that.

Cannabis and anxiety have an interesting relationship. It can treat anxiety, but it can also make someone anxious. Certain strains can reduce your anxiety, or may make you more prone to it. It also can be situational. For example, if you’re smoking at your mom’s house, and you feel like you’ll get caught, you may indeed be more anxious!

If you’re getting into cannabis, don’t do too much and stay mindful. This can help combat that infamous anxiety.

J. Cole is another one of the rappers who don’t smoke cannabis. What makes him interesting as that he’s made plenty of tracks about smoking. At first, it makes no sense, but think about it. Rappers have a target audience, and they must try to relate to that artist. And sometimes, that means they have to pretend to be something they’re not. Plenty of mainstream country singers grew up in a nice suburban home, yet must act like they grew up in a trailer or are from a small bumpkin town.

And those are a few rappers who don’t smoke cannabis. If you look at them, you all see similar stories. They are rappers who tried it once or twice and decided it wasn’t for them, or they felt like they wanted to distance themselves from their cannabis lifestyle. Unlike hard drugs, cannabis didn’t destroy their families or make them end up in rock bottom. They managed to transition from smoking to not smoking quite easily.

Cannabis isn’t meant for everyone, and for these rappers, it was a match not meant to be. However, many of them still rap about the lifestyle and have roots in the cannabis culture. They don’t despise people who smoke, and we bet most of them are happy with legalization. And that’s quite noble, if we do say so ourselves.