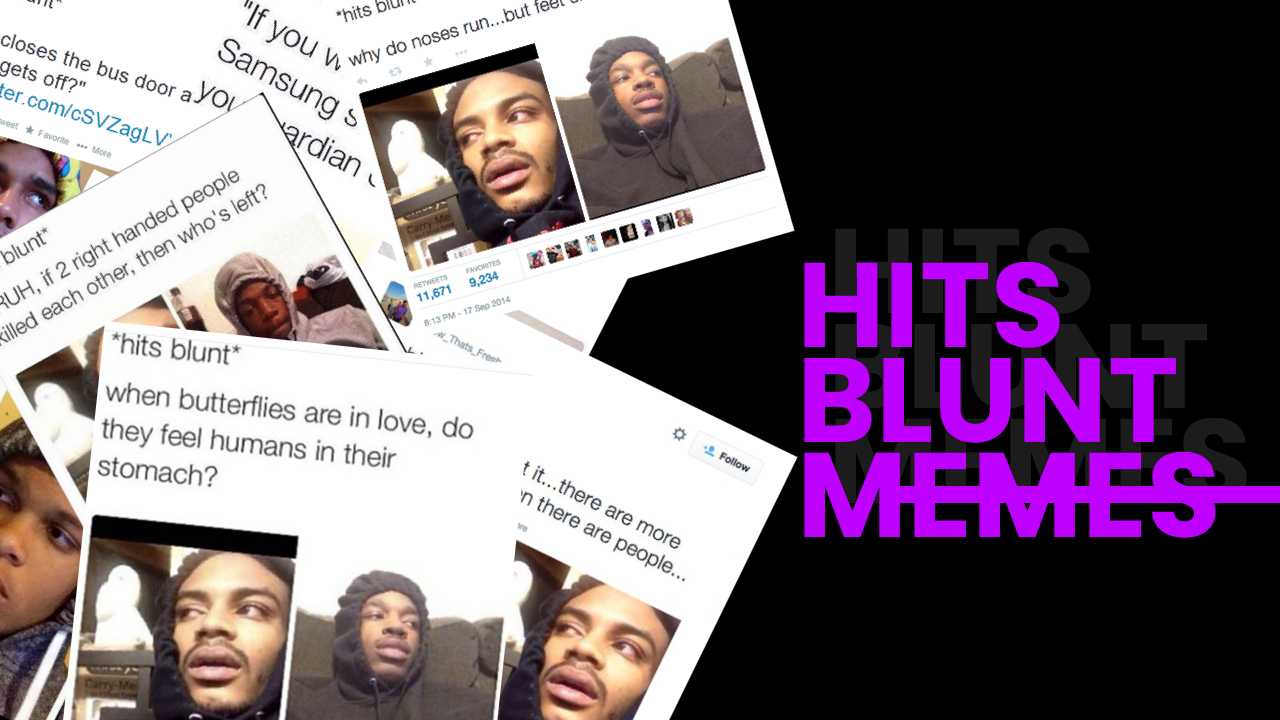 Hits Blunt Memes? Sure, there are times when plans don’t work out, people disappoint you, or it seems like you have no energy to get out of bed. Well, there are days like that and that’s totally fine, so, let us help you lift your vibe with some of the funniest hits blunt memes that never disappoint.

The Hits Blunt Memes are these catchy series of images that appeared on the internet a while ago and they represent the absurd and out-of-the-box thinking you have going on in your mind when you are under the influence of weed. They make you laugh but also seriously think about the issues or questions they present in a different way. These hits blunt memes are a really good way to start seeing things around you from another perspective. Just like with any other hilarious memes, the hits blunt memes got an enormous popularity within months of hitting the internet. Even if you aren’t hitting blunts at the moment, or at all, as a matter of fact, they will be hilarious for you to read. This is why here we have collected a list with the best of the best hits blunt memes for days when you’re feeling under the weather. Word of advice, these hits blunt memes are even better when you are in company with your closest buddies sharing your favorite blunt, trust us.

This one of the hits blunt memes is totally on point when you think about it first, because all apartments as part of a building are indeed together, right? Is there an apartment that’s actually apart from another one and just exists solely on its own? I don’t think so! On the other hand, this meme from the hits blunt memes is kind of wrong too because although apartments are together as a part of a building, they have the walls between them that keeps people apart within the building. Am I making any sense here, or do I have to hit another one to clear my head a little bit more? Whatever the case is, it got you thinking and analyzing buildings in-depth, right?

Speaking of buildings, we got another one for you in the list of the best hits blunt memes. Is today the international building day or what? I don’t know, I guess I’m inspired. Anyways, this one shows the absurdity of the language sometimes in a way words are built (oh, there’s another one!) and used. If you are building a building, why do you still call it a building when you finish building it? Can we change that way of saying things into something like Built or, maybe you should take another puff and think of a better name for our build building. Jeez, these hits blunt memes can be confusing!

Okay, moving on from buildings and apartments and architecture altogether onto fruits and nature because what’s more connected to weed than nature after all? To be honest I always think profoundly about nature when I’m smoking and it makes me realize how beautiful but also underappreciated is. Namely, this one from the hits blunt memes shows another language dilemma that you may or may not never thought of. Why watermelon is called watermelon in the first place? And if there’s a watermelon, why aren’t there firemelons, and earthmelons, and airmelons? That is not fair to the rest of the elemelons on the earth. Why is water more important than them? I know maybe you’ll say it’s because there’s a lot of water in the watermelon as a fruit, but the other melons from the fruit family have plenty of water in them, so there must be some other type of conspiracy theory here. Hmm, let’s just take another hit and think of this before checking out the rest of the memes from the hits blunt memes list.

Lo and behold, here comes one of the most mind-blowing memes in the hits blunt memes world, and also one of my favorite, or should I say the only one? Cheese. We all love cheese, so why are those holes in it that make us have less cheese when we reach for another piece of it in order to get more? So, the more cheese you eat, the more holes you get, which means more cheese = less cheese. Oh, I love these hits blunt memes!

Hits blunt memes hit again! And this time with something unexplainable, or maybe it is explainable when you get enough hits? I don’t know, I gotta keep trying. But seriously, why do we say my nose is running? Where would it go, though? And feet smelling? Where in reality you run with your feet and smell with your nose. But, when you say noses smell you’re talking about the thing noses do instead of saying that noses are stinky. Same with the feet, but the other way around. They smell because they are stinky, and not for what they can do. Get it now? This one from the best hits blunt memes actually came to exist because we get confused about how words work, especially when hitting those blunts.

Last but most certainly not least, the word game of the hits blunt memes blows my mind again. It actually took me a while until I connected the separated letters and actually created the Faded AF backward, but you have to admit it’s pretty brilliant! Can you think of any other words that have the same meaning when you read them backward? Did you know that they were called Palindromes? I certainly had no idea, but now we can say the hits blunt memes made us smarter and taught us something new. Or is it weed that did that? Until we figure it out, here are some other palindromes (I love using that word now) to know, just in case YOU want to create some interesting hits blunt memes in the future:

Want to laugh more?! Check out this funny video of hit blunt memes

Did we make your day better with our list of the best hits blunt memes? If you can think of any other feel free to share so we can complete it and laugh all together!