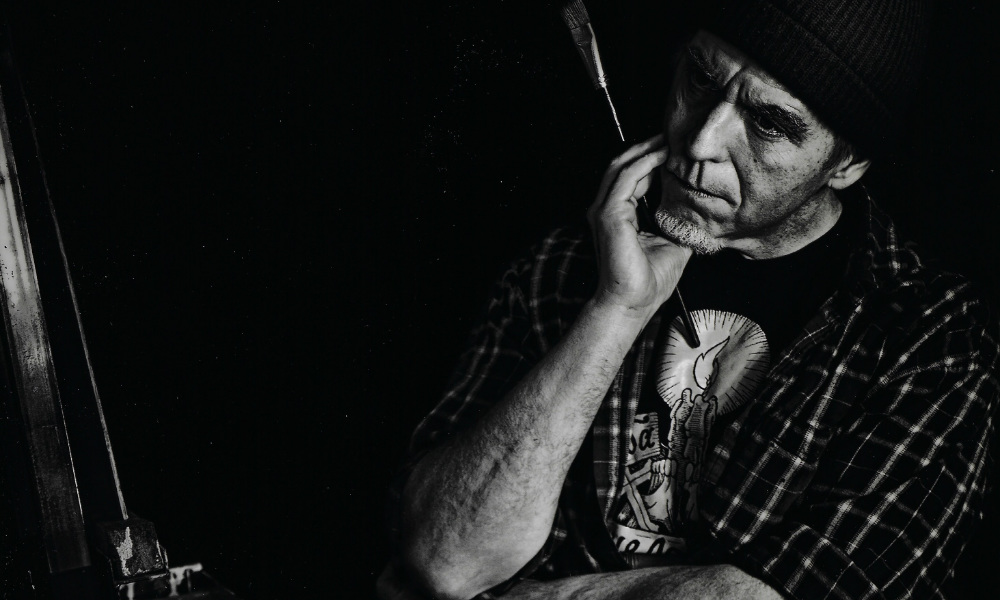 Sean Madden has been creating subversive and surreal art since he was a young man growing up the Buffalo, NY area in the 60s and 70s. Sean’s creations often got him into trouble with school staff and authority figures who were unsure about the images they were seeing.

“My art has gotten me into trouble since I started doing it. It probably confused and entertained many a school counselor and school psychologist when I was a kid,” Sean recounts. “There has always been an anti-societal, surreal tint to it. It harkens back to the underground comic scene from those days.

“All of the garish colors that I work in – those extreme contrasts and colors and shapes and forms, are reminiscent of the old rock posters from those days. Those old Fillmore rock posters. I grew up with all of that in my head. So, when I carried my art into adolescence, [those themes] just stayed. It’s been with me ever since.”

Sean continued to create illustrations and works which allowed him to express the darker corners of his mind. Despite butting heads with a few squares early on, he ended up working a day job – in an almost ironic twist – as a school councelor. He contributed his works to sci-fi and horror publications when the work day was through.

“I actually started out as a sci-fi illustrator and working for horror magazines, believe it or not,” says Madden. “It was a lot of fun. I worked my day job as a school counselor working with emotionally disturbed kids. And then, after my own kids went to bed, I would do illustrations for magazines.”

Sean Madden continued to pursue and prosper as both an artist and counselor for a number of years. It was almost as if he was living a double life. His two identities seemed perfectly harmonized until somebody discovered his portfolio site and reported the dark imagery to the school board. Once again, Madden’s artistic depictions of sexuality and counter-culture had landed him in hot water.

“A group of narrow-minded conservative parents went to my website and lost their minds. My site was full of blasphemy, sex, nudity, violence and dark surrealism. Despite the ‘Mature Content’ warnings, and admonishments not to enter my site, they went in anyway, and were offended. They began meeting in the basement of a church. Their anger and hatred spread like a virus through the small town. They went to a school board meeting to complain about my art.

“Satan for President” by Sean Madden

“They made such a fuss, the superintendent was forced to put me on paid administrative leave. He hated to do it because I was such a valued employee, but his hand was legally forced by these parents. A complaint was sent to the state education department. I was told that my career might be over. I was informed that, since this was a First Amendment issue, the matter would take many years to resolve. None of my lawyers had ever seen a case like mine, so there were no legal precedents to refer to. I had to sit and wait while my case sat on a bureaucrat’s desk in Albany—along with hundreds of other cases.”

The First Amendment battle ultimately ended with Madden’s vindication in 2014.

Sean has since retired, and currently focuses on his art and music. One of his most recent collections revolves around women and weed. Madden’s combination of the two subjects is a reflection of the female qualities inherent in cannabis and its smoke.

“I think that if you were going to anthropomorphize marijuana, and turn it into a humanoid metaphor that people can relate with, it has got to be of the female gender,” Sean explains. “The entire process is one of birth…it’s a feminine process.

“I was trained in a classic Renaissance era technique of building up paintings in thin layers of oil. It takes time to create one piece, but when you do it has the gift that allows for photorealistic effects. It seems to be the perfect method for showing women smoking marijuana.

Sean Madden’s exploration into the unity of those themes and subjects has given rise to a new series. The new collection will feature the same female subject from a number of different angles.

“I’m working on an entire series of the same woman, from different angles, smoking,” says Sean. “The shots that I’m doing of this woman, aren’t clichéd, sexualized shots. I’m more interested in the subtle nuances of her body; the way the light skims across her neck, her breasts, her arm, her stomach, and how that fuses with the smoke.

“I have been having a ball working on this series. I’m going headlong into this. I’m going to do a full 20 paintings of the same woman from different angles.”

As Sean continues to follow his passion for creating striking and provocative pieces, he will do so without paying much attention to the naysayers. He encourages other artists to do the same.

“Stand up to those people,” Sean says, emphatically. “It’s difficult at times because you’ll get an email telling you that you’re going to go to hell. But at least you were real. You were at least genuine. You at least stood for something. I think that the opposition we run into as artists, is because we have integrity.

“If I were doing, for example, bowls of fruit and puppies, or the flag with soldiers running around, shooting bad people, I would never get this hate mail.

“I have no interest in that…in marching to somebody else’s orders. I would rather live that way, with those headaches, than to just conform to make a bigger pay check.”

“When the Acid Kicked In” by Sean Madden

To see more of Sean Madden’s striking work, check out the following links:

“The Next One (Self Portrait Thinking)” by Sean Madden