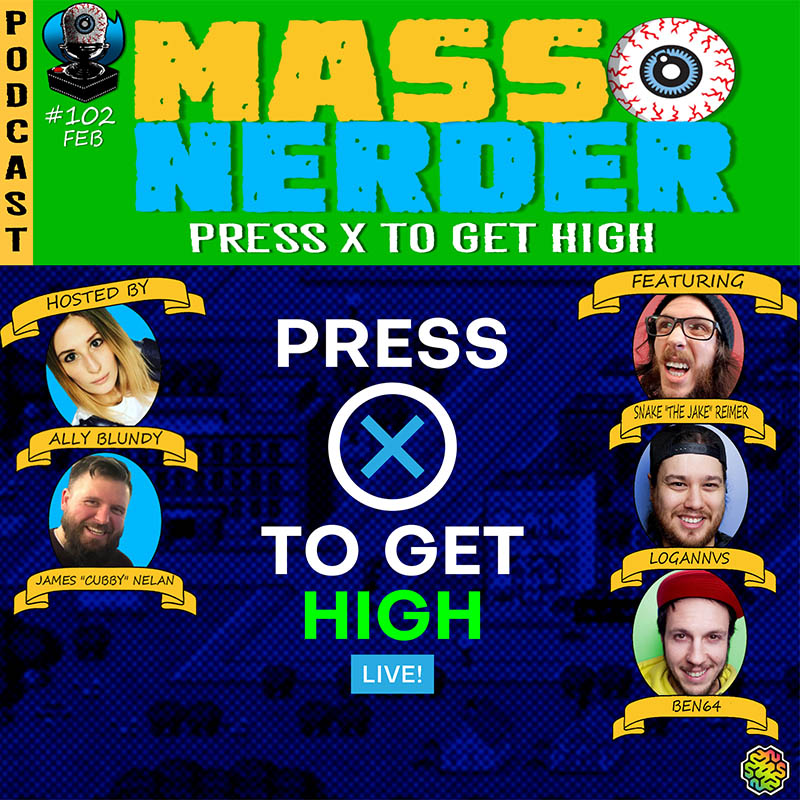 This episode of the MassNerder podcast, Ally and Cubby get together with Snake “The Jake” Reimer, Ben64, and Chris (LogannVs) from the show “Press X To Get High”, a Twitch livestream for weed and gaming! They discuss a huge variety of topics from gaming involving Apex Legends, Fortnite, and Anthem as well as upcoming movies like the Aquaman spinoff, “The Trench”.

Press X To Get High is a fun gaming livestream featuring cannabis and casual gameplay. No hardcore, professional play here for the most part, just some easygoing gameplay to tune into and get a little stoned. Check it out for some lighthearted fun!

Some of the biggest news the team talks about is the Microsoft brining their Xbox Live to a slew of new platforms in a way of providing crossplay. The team sees it as a move for Microsoft to retain relevancy in the gaming marketplace as a top contender. Microsoft’s crossplay aims to bring it link players on PC, Xbox, Android, iOS, and Nintendo Switch.

More on the side of gaming, the team discusses the widely popular Apex Legends. Gaining an impressive momentum shortly after release and hoping to dethrone the ever so successful Fortnite. This also begs the question: Is the gaming industry changing to the F2P model? With F2P games being around since the beginning of gaming with huge hits like RuneScape and even FarmVille, developers may have found the winning formula: Free to Play games with micro-transactions.

This isn’t really new by any means, but the mass market has overwhelmingly swung this way with Apex Legends and Fortnite as a prime example. Maybe it’s the aged perception of our points of view, but we much preferred buying a game for a single cost and being given all the content at once rather than bombarded with DLC and micro-transactions on half-finished games.

On the side of movies and TV, the prospect of the horror-themed Aquaman spin-off “The Trench” becomes an exciting idea. Hype (or lack thereof) for the new Terminator: Dark Fate movie is revealed, though it does feature good ol’ Arnold Schwarzenegger.

The hot topic of the month, Ben and Jake mystically predicted Will Smith as the genie in the new live-action Aladdin before the cast was announced. A proper stoned educated guess we say! Impossible to follow up on the class act of Robin Williams however (rest in peace), hopes are still high for both the Aladdin and Lion King live action.

To end, blue Froot Loops are the master race of cereals and we’re gutted we don’t get them in the great white North. A real tragedy and most important topic the group discussed all day!

To follow all of the team involved in episode 102 of MassNerder, check out the below links. Pop on over to the Twitch stream for some fun, lighthearted, stoned gaming!

Check out the previous iteration, episode 101 of Mass Nerder, featuring Sarah Hanlon, an outspoken cannabis advocate, writer, and winner of Canada Big Brother for some discussion on cannabis legalization in Canada, her experience with Big Brother, and other fun stuff!

You can follow the team of @massnerdercast at their respective Instagram and Twitter pages below. Make sure to tune in frequently to Mass Nerder to get the most up-to-date news as the best podcast for comic, gaming, and movie discussion!

Katamari Balls and Weed! – Press X To Get High

5 Games To Play High – Press X To Get High