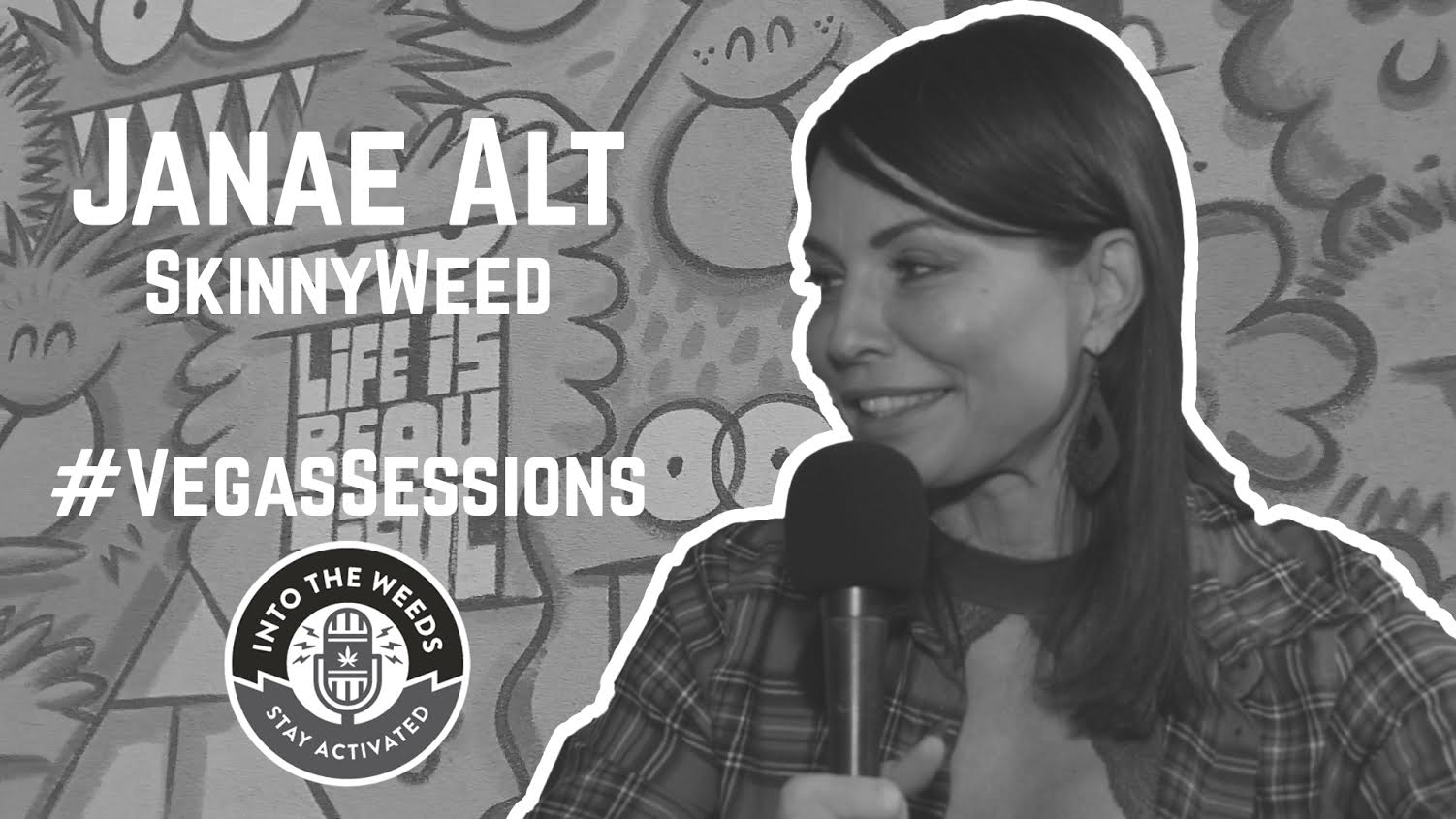 Las Vegas – In episode 70 of Puff Digital’s Into The Weeds Podcast (ITW) host Ben Rispin and guest co-host, Jon Cappetta sits with Jenae Alt. Cappetta is the VP of content at High Times magazine and a regular guest on Puff Digital’s seminal podcast. This is Jon’s fourth appearance on the show after being a guest on the show during ITW’s ‘Hollywood Sessions’. This episode closes out ITW’s ‘Vegas Sessions’ with a bang. The episodes were recorded at the High Times Cannabis Cup Dec 2019 in Nevada.

Jenae Alt is an actress, model, comedian, host of the High Times Magazine 420 live stream and the founder of Skinny Weed. This episode is recorded live and in the intro, Rispin mentions that difficulties were getting the show recorded. “We apologize and thank Jenae for hanging out all day. Because of recording restraints against our shoot time, we were pushed back hours and she stayed positive and upbeat that whole day.”

The episode is a lot of fun with Alt declaring, “I’m going to give you the interview of your life Ben Rispin.”

Alt does not disappoint.

In episode 70 of Puff Digital’s Into The Weeds Podcast Ben and guest co-host VP of content at High Times Magazine, Jon Cappetta, welcome Jenae Alt. Jenae is a model, actor, stand up, High Times live streamer and founder of an all-natural hemp CBD based dietary supplement Skinny Weed. The group chats live at the High Times Cannabis Cup in Nevada about Jenae living in LA, coming up with Skinny Weed, growing up in Michigan and how Jenae got into the weeds.

Skinny Weed’s Jenae Alt Gets Into The Weeds

Featured snippet from the web

Skinny Weed’s scientists have been leading the way in stem cell and regenerative medicine since 2005. Skinny Weed’s Chief science officer is Ali Kharazmi. In addition, Kharazami also founded the Genetic Institute of Anti-Aging. He also founded the Center for Weight Management, the Plastic Surgery Institute, as well as Advanced Surgical Partners.
Their physicians were able to develop what they feel is the most effective weight loss dietary supplement on the market. Our propriety Hyfusion technology enables us to deliver active ingredients to your body. Skinny Weed can do this more and with more longevity, and our Hyfusion + (Patent Pending). This science enables us to target specific areas of the body through the use of polarization.”

About Puff Digital’s Into The Weeds Podcast

Puff Digital’s Into The Weeds (ITW) is an hour-long podcast known for its conversational flow and intriguing quests. ITW features hosts Ben Rispin, Efrem Martinez-Shulz (Death By Stereo, Voodoo Glow Skulls), and industry-expert Bubba Nicholson (Thrive Cannabis). Every episode finds hosts discussing the state of the cannabis marketplace and its various nuances. Tastemakers from across the entertainment and cannabis landscape share how they “got Into the Weeds”

How Do Dry Herb Vaporizers Work