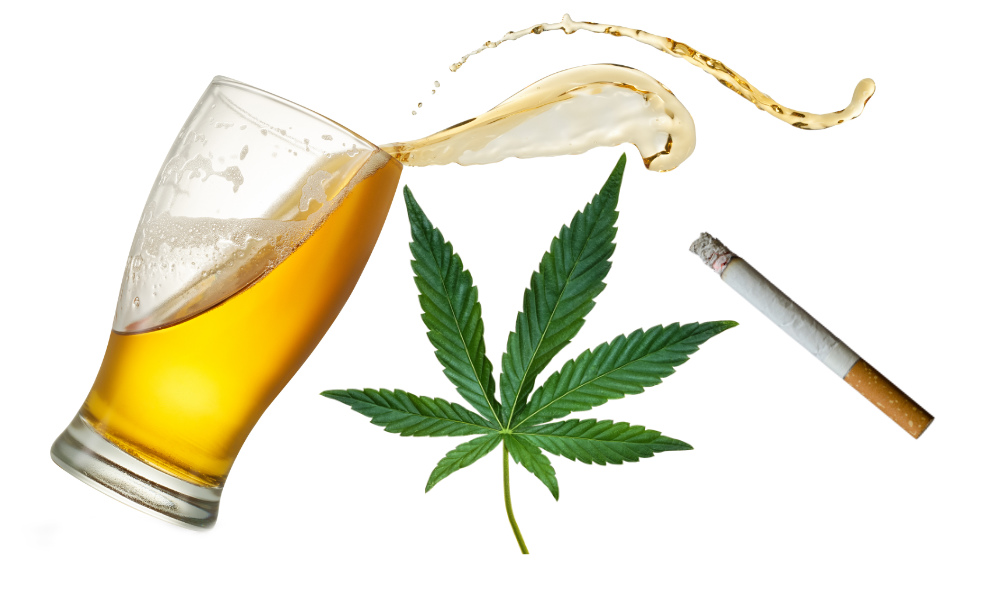 In 2014, former president Barack Obama confessed to having used marijuana as a kid. He also said he had smoked tobacco in his young adult and adult life. Obama’s statement that he considers alcohol worse than marijuana sparked a lot of reactions; both positive and negative. The comparison was based on first-hand experience, but it was also a genesis of research in comparative risk assessment between marijuana, tobacco, and alcohol.

What are the facts behind the risk of these intoxicants? Tobacco, pot and alcohol are mostly used for recreational purposes. Marijuana, however, has broader application in other industries. Unlike tobacco and alcohol, cannabis is also used in medicine to treat various conditions. Let’s dig deeper and find out how each of these drugs compare.

One would wonder why tobacco is legal while it has taken years to legalize cannabis. According to The Centers for Disease Control and Prevention, tobacco causes almost half a million deaths every year in the United States. This includes more than 40,000 deaths for passive smokers. On the other hand, there are very few deaths recorded as a result of using marijuana. The cases are always isolated and not solely related to use of the drug.

CDC also reports that, in the United States, there are over 16 million people living with a tobacco-related illness. What is worrying, this is almost half of the total number of cigarette smokers in the USA. The drug is the leading cause of both preventable diseases and deaths. Though there is consistent decline, maybe due to availability of substitutes like cannabis, the statistics of people who use tobacco and its adverse effects is anything but low.

Just like in the deaths caused marijuana, there is no certainty about the exact number of marijuana illnesses. Apart from a recent report that indicated there were several illness and death as a result of fake cannabis vapes. However, the drug is said to cause mental, heart, and lung-related illnesses but there are few recorded statistics. Tobacco is the primary cause of almost all lung cancer deaths. 9 out of every 10 lung cancer illnesses are as a result of tobacco.

When it comes to addiction, both pot and tobacco are addictive and it remains the primary reason opposing their use. However, it might be more difficult to quit cigarettes because of the high amounts of nicotine which is the addictive component in tobacco. Though scientists claim it is difficult to do comparative addiction analysis, there are several pointers that tobacco is worse than marijuana in comparison. For regular smokers, it is difficult to do almost anything without a cigarette every hour. On the other hand, regular cannabis users can go a day, or at least a few hours, without a puff.

Tobacco has less psychoactive effects compared to marijuana. Cannabis is more likely to cause impaired judgment in comparison to tobacco. Marijuana contains THC, which is the compound responsible for the “high”. However, there are some strains which can increase your focus and concentration. In that case, it all depends on the strain you use and the purpose of using the drug.

The adverse effects of alcohol seem to outweigh those of cannabis. How many people drink to excess in the US each day? This is not rhetorical, we all know several. Among alcohol consumers, more than 11% are likely to drink in excess at least once every month. We have not yet gone into the effects this habit would cause to the user as well as those who interact with them.

Unlike alcohol, it is almost impossible to overdose on marijuana. It would take you more than 500 joints to have a cannabis overdose.

According to CDC, there are almost 90,000 alcohol-related deaths in the US every year, with men the most affected. The number makes alcohol the 3rd highest cause of preventable deaths after tobacco and accidents. The number could even be higher because driving under the influence of alcohol also causes deaths due to accidents. The ripple effect of alcohol abuse goes beyond the direct consumer to those around them especially family members.

According to WHO, alcohol causes over 200 diseases and injury conditions. Interestingly, cannabis is used in treatment for some of these conditions (such as chronic pain). The most prominent alcohol-related illness is liver cirrhosis while, for cannabis, it is lung-related illnesses.

The Menace of Drunk-Driving

Do we advocate you take a joint before driving? Not really. Pot use also increases the risk of accident (approximately 83%). Therefore, you should avoid using any drugs when you know you will be at the wheel.

Alcohol is quite addictive in comparison to marijuana. According to a 1994 study by NIHA, about 9% of cannabis users are addicted to the drug, while 15% of alcohol users can be categorized as dependent. Therefore, it becomes more difficult to quit alcohol than quitting marijuana.

Alcohol addiction – which also leads to excessive consumption – is one of the primary causes of domestic violence. It can also affect the lives of family members socially, financially and physically in cases of assault. On the other hand, research shows that cannabis is inversely related to intimate partner violence in the first 9 years of marriage.

The debate on marijuana vs. tobacco vs. alcohol seems long solved. Marijuana has the least adverse effects compared to the other 2 drugs. Though cannabis is still illegal for recreational use in most states, there is a need to review the regulations. Drugs like tobacco and alcohol’s adverse effects far outweigh the effects of pot. The two do not have medical benefits, unlike cannabis which has numerous applications in the field of medicine.

Where Did Weed Originate? The Story of the Marijuana-Wrapped Mummy