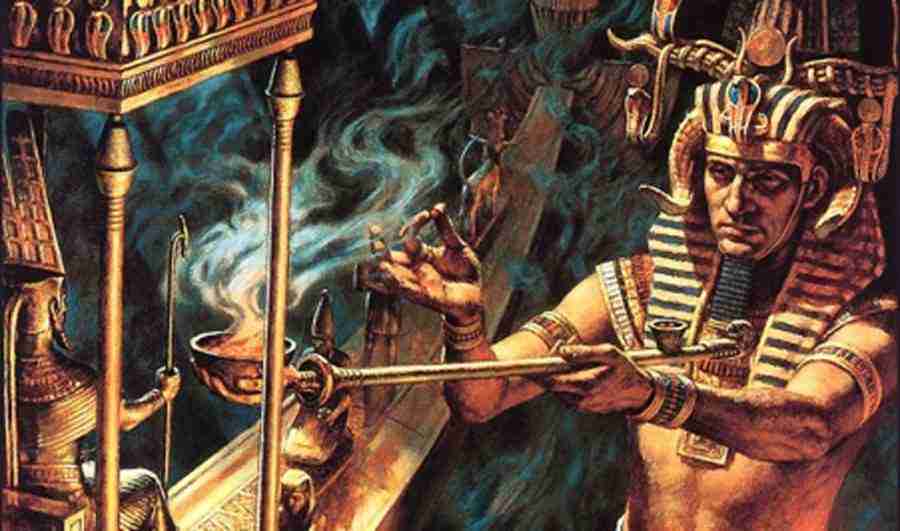 Cannabis and hemp’s integration into ancient civilizations was seamless and efficient.

But where did weed originate? And how old is marijuana?

Can the origins of cannabis be traced?

To answer these profound questions, we have to look at the ancient past. Archeological record, discoveries, and plant fossils can all shed some light on how cannabis was used and its role in the evolution of mankind.

In fact, cannabis actually dates back to a lot farther than you think.

But seriously, where did weed originate?

The oldest known traces of marijuana date back to the steppes of Central Asia. More specifically, the areas that are now Mongolia and Southern Siberia.  According to Warf, the history of cannabis use and integration into society goes back as far as 12,000 years. This places it among the list of the oldest cultivated crops by man.

According to information in the book “Marihuana: The First Twelve Thousand Years,”

“It likely flourished in the nutrient-rich dump sites of prehistoric hunters and gatherers.”

Want more answers to the question: where did weed originate?. Then you’ll need to travel a long way back in time! First, you’ll need to hop in your trusty old Delorean and step back to just under two years ago in the autumn of 2016, in Turpan, China. Turpan, Terpenes, Terps? Hmm? Great start already!

What made this burial so unique is that the body was wrapped in marijuana plants and leaves, they were literally laid to rest in a beautiful weed blanket.

How Old is this ‘Weed Blanket’?

Time to find Doc Brown again and travel even further back. This time around 2,500 years back in time and that is roughly how far that marijuana leaves date back to (those must have been some crispy buds!).

What also makes this discovery so unique is the fact that the skeletal remains belonged to a 35-year old male that exhibited caucasian features. He seemed to be traveling along The Silk Road which linked China to the West and was a popular route for trading.

It was named this due to the fact that silk was the major trade item along this road, and possibly some seriously dank weed was traded along the way as well.

What does this possibly tell us?

It gives us a potential answer to the questions: how old is marijuana? and where did weed originate?

It also tells us that people have been possibly getting high for centuries! Or maybe it’s possible this discovery suggests that cannabis and its psychoactive properties might have been used for ritual purposes. Thirteen plants, all up to a meter long, were wrapped around the man’s body, which was laid upon a wooden bed while his head rested upon a pillow of reeds.

I wonder if there is any significance to the number of plants used. Like some kind of reverse luck? Considering that superstitious people freak out over the number thirteen. Just look at elevators in tons of buildings, there’s no thirteenth floor! Well technically there is, but yeah, you know what I mean. It’s also entirely possible that the number of plants used represented some sort of other significance in the man’s life? Like how many blunts he smoked in a row that one time.

How Old is Marijuana? More on the Weed-Wrapped-Mummy

The roots of the plants started under the pelvic area and extended up over the body. The tips of the plant, most of which had been trimmed, were laid across the facial area. So he was basically wrapped in a blanket of weed. Yup, I’m pretty sure that I just figured out my new sleeping arrangements.

How old is marijuana? and where did weed originate?

Well, this discovery adds to a growing body of evidence from many other finds across the globe, and also from numerous amounts of research and studies that have been conducted. Studies showing that marijuana may, in fact, have been used by ancient civilizations for its psychoactive properties, which in turn may have also been incorporated into their rituals, such as this particular burial shroud. So we pretty much have had stoners for centuries, pot-heads since forever ago.

Scientists and archeologists have questioned whether or not cannabis plants were also used as a trade in the area, or if it was farmed, or even if it possibly grew wild throughout the region.

Archeologists used radiocarbon dating to determine the age of the tomb, which was anywhere between 2,400 to 2,800 years old according to National Geographic. This unique discovery provides insight into the ritualistic use of cannabis in prehistoric Asia, as traces of cannabis were also discovered in other tombs in the area. Revealing that cannabis may have been used by the local Eurasian people for medicinal and ritualistic practices.

The oldest smoking sessions ever sparked

Is it just me, or could this be some signs of one of the oldest “sessions” ever? Does this actually help answer the questions: how old is marijuana? and where did weed originate?

This burial was just one of the 200+ graves that have been excavated at the Jiayi cemetery in Turpan. Previous discoveries in Turpan’s tombs only contained parts of plants. This made it difficult for the archeologists to determine where the cannabis originated from. But thanks to this recent discovery and the whole plants that were used to wrap the body. They were, in fact, able to determine that it was grown locally and was indeed fresh when originally laid upon the body. Of the thirteen plants, most of the flowering heads were cut off (interestingly enough they were all female. Hmmm?), but the few that remained intact suggested that the plants were harvested when the burial occurred, in the summer. What better time to throw a weed party than in the summer? Am I right? Huh huh? Am I right? Hot summer sessions, ladies, and gentlemen!

Concluding on: where did weed originate? How old is marijuana?

This was the first discovered incident where cannabis leaves were used as a “shroud” in a human burial, and it was also the first time that archeologists had discovered whole and mostly intact cannabis plants. Since this is the first time where whole plants have been found, maybe it’s because it was shwaggy weed and nobody wanted to smoke it? Maybe all the other discoveries contained a bomb stash, and that’s why there was hardly anything left? Don’t get me wrong, there have been discoveries of other cannabis plants throughout burials in Turpan, most notably in Yanghai over a decade ago. Where there were an estimated two thousand pounds of cannabis seeds and powdered cannabis leaves that were discovered. Two thousand pounds of seeds! Could you imagine the size of the crop that you could grow with that amount? Wow!

The discovery of these tombs was said to belong to the culture known as the Subeixi. Wikipedia lists that they were also known as “The Jushi or Gushi Kingdom”, which makes me think of the Super Mario Bros. for some reason? Like I could picture Toad living there, heck, Yoshi too!  Yoshi would eat buds with his super long tongue, and Toad would just smoke all day and hot-box his toadstool home. Yeah, super good times!

The Jushi or Gushi Kingdom

The Gushi Kingdom existed there some 2,000 to 3,000 years ago, so they might actually be the OG’s of cannabis bartering? The Subeixi were known as ”pastoral people” and were said to be the first permanent residents of the Turpan basin (a.k.a. The Terpene Base) in western China. Or maybe they were just the original stoner settlers who happened to find a killer crop to live off of and spent their days in a mellow haze! Ahhh, those were the times.

Still wondering: where did weed originate? Time to travel to China to learn about ancient farming.

How To Make Dabs Safely At Home