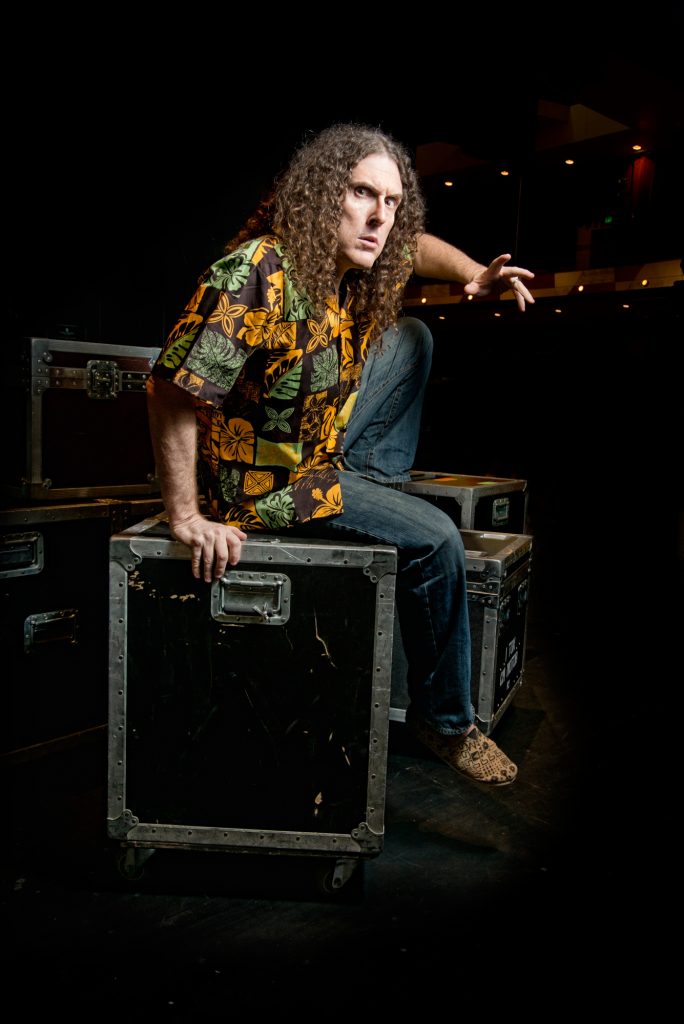 Here’s what happened when I got super baked and saw Weird Al Yankovic perform live.

I’m gonna go out on a limb and say something that might seem silly at first, but just hear me out on this… Weird Al Yankovic is one of the greatest musicians of all time.

Just so you know, I typed that with a totally straight face and no part of me meant it as a joke or said it to get a laugh. The man is an absolute genius. I mean, name me another artist who’s remained relevant and consistently putting out material for almost FORTY YEARS. Name me another musician who’s act didn’t get stale or repetitive DECADES into their career.

Actually, no I won’t because this is an article and you can’t possibly respond to that hypothetical inquiry in real time. Also because there’s no one.

Either way, I digress. This article isn’t supposed to be defending Al’s resumé; it’s supposed to be about the time I got REALLY high and went to see him in concert.

“When the show rolled around, we did the sensible thing: we got really, REALLY high and went to rock out to some Al Yankovic.”

When I found out that Weird Al was coming to perform in my hometown, I had to buy tickets immediately! I excitedly called up dozens of friends to let them know about the show. It turns out I only have four cool friends, though, so I got five tickets. When the show rolled around, we did the sensible thing: we got really, REALLY high and went to rock out to some Al Yankovic.

The day of the concert, my friend Ryan found out that it would be entirely Al performing original songs. This came as a total shock and a bit of a bummer at first. Here I was, ready to see the master of the parody and jam out to “Fat”, “Amish Paradise”, and “White & Nerdy” only to find out I wasn’t getting any of those gems. I couldn’t believe it, but after checking Al’s website, the “Vanity Tour” was, in fact, mostly Al performing original songs in intimate rooms without any props, costumes, or video displays. Consider my bubble completely burst.

Still, I wasn’t about to just bail on the show. I bought tickets, after all. On the way to the venue, we speculated about what sort of crowd a Weird Al concert might attract. Seriously, what even his demographic? Would it be sold out? Would there be more than a dozen females? Would there be anyone under the age of 20?

“Keep in mind, I am 10/10 baked at this point, shouting birthday greetings at a stranger while in the midst of peeing, and the concert hadn’t even begun yet!”

My first task upon arrival was to head straight to the bathroom and unleash the seven beers I had stored in my bladder. As soon as I walked into the packed bathroom, a drunk dude was shouting at the top of his lungs about how proud he was that his best friend just had a baby. We all cheered for the stranger.

As if things couldn’t get more jovial, someone else chimed in, shouting from one of the stalls that it was his friend’s birthday. So, we did what any crowd of strangers in a public bathroom would do: we broke into singing “Happy Birthday” at maximum volume. Keep in mind, I am 10/10 baked at this point, shouting birthday greetings at a stranger while in the midst of peeing, and the concert hadn’t even begun yet! Things were off to a great start.

Following the bathroom party, we took our seats. I was shocked at how full the massive venue was. It said online that this would be an intimate show, so I was not expecting a giant theatre with rows of balcony seating. I also had no idea that Al could still pull this sort of a crowd (or that he ever could, for that matter).

“Little did I know this would turn out to be such a blessing in disguise.”

Suddenly, the lights go out, the spotlight comes on, and out comes Al. The crowd goes wild. He took a seat on a stool as four band-members took their position at instruments surrounding him. It was all very simple; no frills and no extra pageantry. Just a man, his band, and some silly songs. From the moment the concert started, I had a smile on my face from ear to ear.

I’ll be honest, my expectations were somewhat low since I found out he’d only be performing original tunes. Little did I know this would turn out to be such a blessing in disguise. We’re all familiar with the hit parodies, but watching Al perform a full concert of B-sides was exactly what I didn’t know I needed.

Masterpieces like “Why Does This Always Happen To Me?” and “The Biggest Ball Of Twine In Minnesota” stand out for me as undiscovered gems in Al’s discography that I otherwise would have brushed over. This concert really allowed me to appreciate the genius that is Weird Al. It also didn’t hurt that I was so baked. While his songs might not be about weed, per se, they’re definitely geared towards a pro-cannabis audience.

“The guy sitting next to me was particularly into it.”

It seemed like everyone in the venue was loving it. People were singing along and laughing to the punchlines throughout the entire 90-minute performance. Al used no special effects or video displays; it was just pure comedic music for an hour and a half and it never dragged once. The guy sitting next to me was particularly into it. He knew every word to every song and would react with excitement every time Al started a new track. He must have said,

“Oh, this one is my favorite!”

Al even ended the concert by giving the people exactly what they wanted: a ten-minute medley of all his biggest parodies. At this point, it almost felt like he was giving us too much. After such an incredibly impressive show, to then gift us with the goods… it was like having the most decadent chocolate cake after a full meal of steak and lobster. For me, it was a joy overload.

I left the venue with a smile on my face, totally blown away by what I just witnessed. A 58-year old man sat on stage for an hour and a half with nothing more than an accordion, playing lesser-known b-side songs, and managed to retain my attention and keep me entertained throughout. If that doesn’t constitute one of the greatest musicians of all time then I don’t know what does. Also, maybe the fact I was so high had something to do with it.

I Dreamt The Ending To ‘Game Of Thrones’