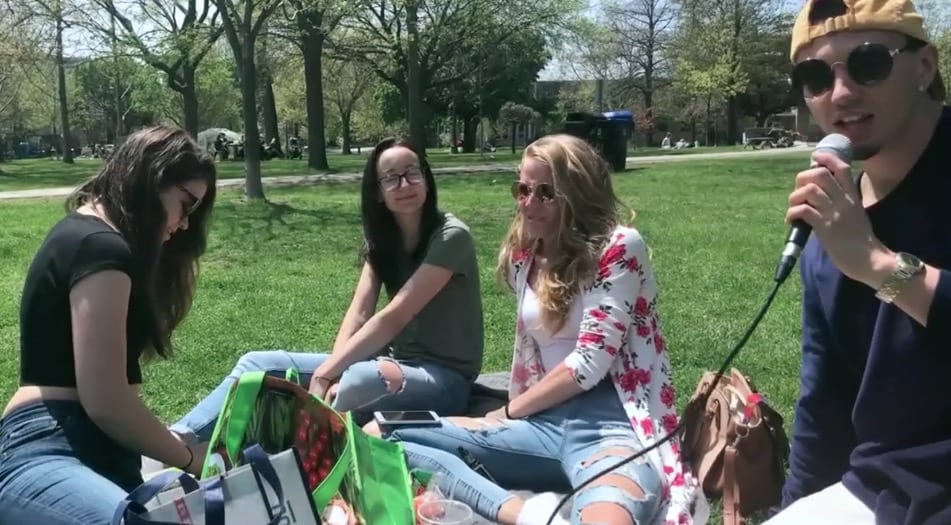 Our pal Ellevan took to the streets of Toronto to ask the people some hard-hitting questions.

We sent our special correspondent Ellevan out to the streets (actually, parks) of Toronto to interview people and ask them some serious, through-provoking, insightful, tough questions like “What’s better, Drake or Soup?” and “Who’s better, Eddie Murphy or Allen Iverson?”

In a world currently full of divide and debate, it’s questions like these that really spark the important discussions.

Check out the video below:

What would your answers be?

On the one hand, Drake is one of the biggest music stars of all time and it seems like anything he puts his name on automatically is a smash success. He’s especially popular in his hometown of Toronto, so the people might be a bit biased. On the other hand, soup is delicious and an underrated food. There are so many different types of soups, and name me another filling food that can be eaten as a meal that doesn’t require chewing. Go ahead, I’ll wait.

Both men are top-tier innovators. Steve Jobs, of course, is the founder of Apple, the company that brought us iPhones, MacBooks, iPods, and pretty much every other piece of technology you use on a daily basis. Smartphones weren’t a thing before this guy. On the other hand, Elon Musk is doing so many different, world-changing things that it’s tough to put him second to anyone. Not only is he planning on getting humans to Mars, but he recently sent a car into outer space. Good luck figuring that one out.

There’s no real correlation between the two other than the fact that they were both considered one of the best to do what they did. Eddie Murphy changed the comedy game with his stand-up special, Saturday Night Live appearances, and classic movies. Allen Iverson changed the face of basketball, and pop culture in the process, by bringing his own unabashed style to the NBA.

Leave your answers in the comments below!

How to Make It: Honey Whole Weed Multi Grain Bread