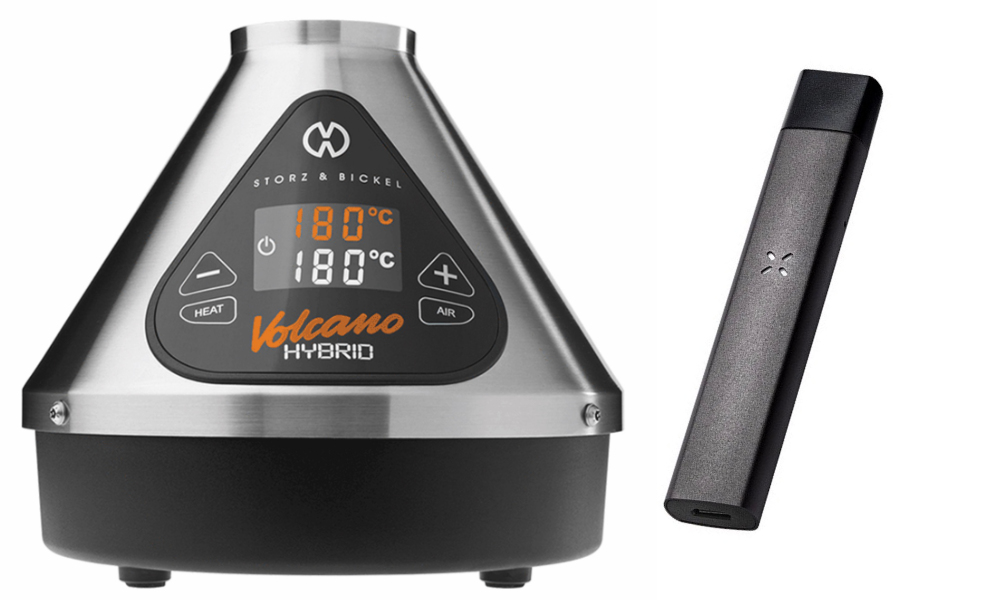 Advancements in technology have brought a number of changes to the way herb is consumed. Word is spreading quickly about the excellent benefits derived from vaping marijuana compared to smoking it. But which is better, desktop vaporizers or pen vaporizers?

There is a lot to learn about vaping whether you’ve embraced the vaping culture or have yet to give it a try.

There are several types of vaping devices. They range in size and functionality from the large desktop version to the small, pen-sized version. However, your choice of vaping devices depends more on what suits your lifestyle needs.

To help you determine which is best for you between the desktop vaporizers and the pen vaporizer, we will explore each type of vaporizer in detail.

A desktop vaporizer has a larger bowl to accommodate more herb or concentrates. They also house a larger vaping chamber and, in some cases, more than one vaping outlet – or pipes – to enjoy vaping simultaneously with friends.

Primarily, the choice you make between the two types of desktop vaporizer depends on what suits you most: communal vaping, or vaping in a private session.

Vape pens offer you the advantage of mobility because it is small enough to carry around and disguised enough to pass for a pen. A vape pen is ideal if you move around quite a lot, and you like to vape on-the-go.

The downside of using a vape pen is that you do not get a rich and satisfying vaping experience like what you get from using the desktop. This is because a vape pen has a smaller bowl and a smaller vaping chamber.

To get a more productive and more satisfying vaping experience from a vape pen, you might have to reload your vaping pen quite often after each round of vaping.

Convection and conduction are the most common heating methods used in vaporizers to heat herbs, concentrates, or oils.

Desktop vaporizers work by convection method. They heat the air around the herb to a temperature high enough to vaporize flavonoid compounds without burning the herb.

Heated air around 190-230°C passes from the heating element over the herb by an automatic propeller mechanism or by other manual mechanisms.

Virtually all vape pens use the conduction mechanism to vaporize cannabis concentrates or oil.

The conduction mechanism works by heating the coil in vape pens. The coil is in direct contact with the bowl, which houses your herb, wax, or concentrate. Direct contact with heat from the coil vaporizes the cannabis to give you vapor rich in cannabinoid compounds.

Herb vs. Concentrates or Oil

Vape pens are ideal for vaping concentrates and oils because of its conduction mechanism. However, a good number of vape pens can vaporize herbs, concentrates, and oils.

The quality of vapor produced depends on the temperature at which you are vaporizing your cannabis.

Desktop vaporizers tend to have more advanced temperature regulation features. These enable you to adjust the temperature precisely to a high temperature suitable for producing more significant quantities of vapor rich in cannabinoid compounds.

Desktop vaporizers are plugged into a power source to provide you with enough power for hours of quality vaping experience. The desktop is your best bet if you love the vaping experience that lasts a long time.

Vape pens use battery power as a power source. In most cases, vape pen batteries do not last beyond two hours of vaping. Vape pens with a removable battery make it possible to enjoy longer vaping sessions.

Desktop Vaporizers are more expensive to purchase as a result of its size, advanced technological features, durability, and rich vapor produced by the unit.

Vape pens are cheaper to obtain if you’re on a budget. However, they do not offer the rich vaping experience obtainable with a desktop vaporizer.

While it comes down to personal preference, a desktop vaporizer is better because it produces more quantities of vapor richer in cannabinoid compounds than a vape pen  due to its high-end features.

A vape pen is preferable for its portability and the chance of vaping outside of your house while on-the-move.

How To Make Cannabis-Infused Condiments

Stoner Accessories That Can Make Your Life Easier and Funnier